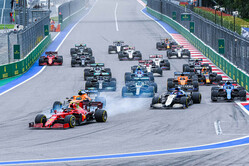 Fernando Alonso says that his audacious move at the start of the Russian Grand Prix was purely to prove a long-held view, namely that different rules apply to different people.

On his way to the grid ahead of the race, the Spaniard appeared to make a mistake at Turn 2, missing the corner and driving through the re-entry bollards as laid out in the rules.

At the start of the race proper, he once again missed the corner, and cutting through the bollards had made up a couple of positions, though he subsequently slowed and handed them back.

It was clear that the pre-race incident was a rehearsal of what he had planned for the start of the Grand Prix, and speaking in Turkey today, the two-time champion, admitted that the move, which was intentional, and went unpunished, was a means of proving a long-held view.

"It was just to confirm that when I do things, they have a different behaviour, and a different repercussion on the following event," said the Spaniard. "So now, maybe they change the run-off area in lap 1 in the first couple of corners."

Alonso has previously warned that rivals had pulled similar stunts on the opening lap.

"I've been the idiot on track for most of the championship," he said, "I've been overtaken from the outside of the asphalt by many people for the first couple of races. Even in Austria, I remember Austria 1 and Austria 2, and nothing happened. There were no questions on the following race.