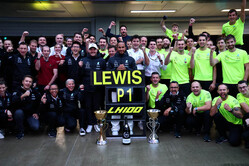 Fans of a certain vintage will recall when Fangio's five titles seemed a step too far as the sport became ever more competitive.

Then came a certain Mr Schumacher.

While Lewis Hamilton has equalled the German's seven titles and broken so many of the sport's other records, yesterday's victory in Sochi, which marks his 100th Formula One World Championship Grand Prix victory is among the most impressive.

79 of those 100 wins have come with the Mercedes team, while yesterday also saw the Briton become the first driver to surpass 4000 points.

Unlike Sebastian Vettel, Hamilton is not one to spend his time thinking about the sport's history, its statistics its records... yet even he is aware of this historic milestone.

"It's a magical moment," the Briton told reporters. "I could have only ever dreamed of still being here and having this opportunity to be able to win these races, and get to drive with such phenomenal talent this late in my career.

"And to continue to be building with Mercedes, of which I'm so proud of everything we've done, not only on track but also off. It's a special moment I think for everyone that has been a part of it.

"I've had the most incredible team back home, my little personal team at Project 44," said the Briton, who won his first Grand Prix just six races into his career, and finished his rookie season just one point down on champion, Kimi Raikkonen.

"Honestly there's so many, too many to name, but ones that have been with me since 18 years," he continued. "I'm just forever grateful to them for their continued support and belief in me.

"To my parents also, my dad even just last night, just the same as the first race I had or the first championship that I fought in when I was eight, my dad called me last night and he's always been that one reassuring me and continuing to support me.

"There were moments where you didn't even know if it was going to happen. So I feel incredibly grateful for the amazing support that I've had and especially to Team LH, Team LH Russia, and all over the world, they've been absolutely magical for so long. I couldn't have done it without them."

"A big congratulations to Lewis on his 100th win," said team boss, Toto Wolff. "What we are witnessing is just mind-blowing.

"It will be talked about for the next few days," he continued, "but it'll only be years down the line when we realise that we've all been part of this journey.

"A journey no other driver in F1 history has done so far. That's beyond race wins and championship victories, that is the very human part of all this."