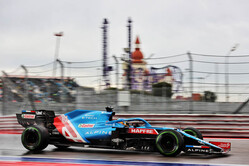 Alpine F1 Team qualified for tomorrow's Russian Grand Prix with Fernando Alonso in sixth and Esteban Ocon tenth after a thrilling wet to dry Saturday Qualifying session at the Sochi Autodrom. The result is the team's fifth Q3 appearance with both cars this season.

Overnight rainfall continued into the morning leading to the cancellation of Free Practice 3. The rain cleared just before Qualifying with the session starting to schedule at 15:00 local time.

For Q1, Esteban started on new Intermediates with Fernando the sole driver to sample the Extreme Wets. He soon joined the rest of the field on Intermediates after setting an initial lap-time. With conditions improving fast, both drivers were comfortably through to Q2 with Fernando seventh and Esteban ninth.

The pair then progressed into Q3 with Fernando in third and Esteban sixth after a strong final effort on Intermediates at the end of the session.

Conditions continued to improve enough for a switch to dry tyres towards the latter stages of the session. Fernando made the change to Softs midway through with his second effort, a 1min 44.204secs, good enough for sixth. Esteban was unable to improve on his lap-time, a 1min 45.865secs on Intermediates, on his only run on Softs and remained in tenth.

Esteban Ocon: "I'm a bit frustrated with today's Qualifying as we weren't able to optimise Q3 in the changing conditions. Ultimately, we didn't put the right tyres on at the right time in Q3 and we missed out on two attempts on Softs at the end. There was definitely potential for more than tenth today as I like these sessions in challenging conditions. On a positive, we have both cars starting in the top ten and it's not a bad starting position to be in. Tomorrow looks dry, but whatever the conditions, we will be ready."

Fernando Alonso: "I'm happy with sixth position in qualifying as the conditions weren't easy out there today. It was very stressful as we've never run in the wet in Sochi. There was no time to experiment and find where the grip was on the track. But, in the end, we were competitive in both wet and damp conditions. I also lost about five tenths of a second on my final lap in Q3, so I could have qualified even higher than sixth. Tomorrow will be difficult because we have several very fast cars starting behind us, but I'm looking forward to the challenge."

Davide Brivio, Racing Director: "At the end we have come out of a difficult Qualifying with both cars in Q3 inside the top ten, which is a positive. We had the potential to be a little bit higher up as Fernando made a small mistake on the last lap, which cost him some time, and Esteban needed one more lap on the dry tyres right at the end of the session. All the same we are in good shape for tomorrow, when the conditions will be very different, hopefully dry, so we can consolidate our points-scoring run of 13 races."