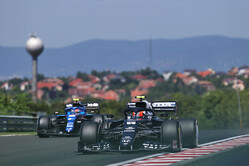 Pierre Gasly: "I'm very pleased with today, particularly after Silverstone where we struggled a bit. It's good to see that we've got the performance back again. The car felt good even in these really hot conditions, so we'll see how we do tomorrow. The Alpine car is looking very fast this weekend so we'll have to work hard tonight to try and get them in Qualifying. I think it might rain overnight, and also in the morning, so we may have different track conditions tomorrow. The pace of the car seems to be good though, so we can go into tomorrow with confidence."

Yuki Tsunoda: "I'm really disappointed with today, I made a mistake in FP1 and it meant that I've lost more than a session's worth of running. The rear of the car felt very nervous, especially in high-speed corners, and I was losing a lot of time there compared to Pierre. I was trying to improve in those areas, but I lost control of the car and I went into the wall. Unfortunately, the gearbox was damaged, and the team had to work really hard to get my car ready for the afternoon. The mechanics did a really good job getting the car fixed before the end of the session, so I was able to get one push lap in during FP2. It was really helpful for both the engineers and I to get this, so we can review the data tonight."

Jonathan Eddolls (Chief Race Engineer): "It's a tale of two halves today for the team. Pierre's side of the garage have had a very good Friday, we hit the ground running in FP1 and he showed a very good performance on all of the tyres and particularly on the short-run, where the car seems to be in a good place. For sure, the race will be difficult, especially if we have these very high temperatures as it's very hard on the tyres, so that is probably an area that we should work on for the rest of the weekend. We've brought some aero updates to this race and they are performing as expected, which is really positive. Yuki was having quite a good FP1 up until the spin, which was unfortunate for him. He sustained some damage to the car which was fairly extensive and took quite a long time to repair. The mechanics did an excellent job getting the car back out before the end of FP2 and Yuki was able to get one push lap in before the end of the session. He completed this lap on the Softs, however he ended up in the mix of cars doing long-runs, so we can't consider his time representative of the real performance. It was always going to be difficult getting that lap in but thanks to the mechanics' hard work we were able to check that everything on the car is ok and it will also allow Yuki to analyse the set-up changes we made to the car after FP1. The forecasts here have been changing daily, so who knows what weather we'll have tomorrow!"