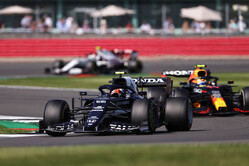 Yuki Tsunoda: "I'm quite happy to have come away with a point today. I tried to stick to the plan, really focus on tyre management, and I think I achieved that well. I've struggled a bit throughout the weekend and the different format has made things slightly more difficult for me as a rookie, so I'm pleased to have come away with an all-important point for the team."

Pierre Gasly: "Honestly, I have no words. We were in the points right until the end, then unfortunately I had a puncture and had to box with five laps to go. It's very frustrating to be coming away with no points after today's race. There are still some positives to take away though, as after quite a difficult weekend, the pace when I was alone in the middle of the race today was quite good, once I'd managed to clear the traffic. We obviously want to continue to fight for better positions, so we'll work hard to understand the areas we've struggled with this weekend and hope to be more competitive again in Hungary."

Jody Egginton (Technical Director): "The pace of the car hasn't been where we expected it to be leading up to the race. Our Qualifying was below our expectation and then in the Sprint Qualifying there was a lot of traffic, so we couldn't make any progress. Today in the race, we managed to use the strategy to extend our first stint on the Mediums, which worked out quite well and allowed us to jump some competitors with both cars. This allowed us to be in a good position to fight for the points with Pierre and then get close to that with Yuki. Pierre looked quite strong against Alpine and Stroll, however it's difficult to overtake here. Unfortunately, Pierre then picked up a puncture from debris on track and was forced to pit for Softs near the end of the race, taking him out of the points. Yuki was in a position to benefit from this and has managed to score a point here. We could recover some of our losses, but our expectation was that we could've been finishing in P8 today so it's still quite disappointing. We've got to go away and get ourselves organised for the next race, as we've demonstrated today the midfield battle is extremely tight and we need to be scoring points each race."