Verstappen: I fought hard, but not aggressive 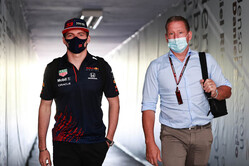 Though, in the days leading up to the Hungarian Grand Prix weekend, Max Verstappen insisted that he wished to move on from the events of Silverstone, it was inevitable that the Dutchman would be asked his opinion, for other than the fact that he hasn't spoken to the media since the clash, there is the little matter of his team seeking a review of the incident.

Asked about the clash at today's press conference, Verstappen said: "I fought hard, I defended hard, but not aggressive... because if it would have been aggressive I could have pushed him or squeezed him into the inside wall.

"I did give him the space," he continued, "and then I just opened up my corner, and when you then commit on the inside like he did and not back out, expecting he can do the same speed on that angle that I had on the outside, you are going to, of course, crash into me.

"I'm on the outside, I'm opening up my corner and not expecting him to commit, and he understeered into the rear of my car," he added.

Referring to the 10s penalty handed to Hamilton, the Dutchman said: "Basically you take out your main rival, and especially with the speed we have with our cars, we are miles ahead of the third-best team. "We are easily forty, fifty seconds ahead in normal conditions. So a 10 second penalty doesn't do anything. So definitely that penalty should have been more severe."

When it was pointed out that the stewards decision cited Hamilton as "predominantly at fault", thereby inferring that he was partly to blame, Verstappen insisted: "I don't know how I have a percentage in that fault.

"So from my side, a bit surprised, yeah, that there is a little bit of a percentage in there."

Citing, Hamilton's subsequent move on Charles Leclerc at the same corner in the final stages of the race, Verstappen said the move was "a great example that it is possible to not touch" in that corner.

"Of course at the time he knew he had the faster car, so it was just a matter of time to pass," said the Red Bull driver. "But it does show that it is possible to go up the inside, but then back out more, slow down a bit more, and not hit the other driver.

"I think at the middle of the corner, I was actually opening up more than Charles did even. It's a great example within the same race that it is possible to fight into that corner."