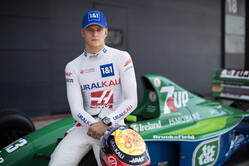 In an iconic moment, at Silverstone yesterday, Mick Schumacher took to the wheel of the Jordan in which his father made his F1 debut thirty years ago.

The Haas driver was on tyre testing duty for Pirelli at Silverstone, when, during the lunch break, Sky Sports had arranged for the youngster to drive the iconic green car in which his father made his F1 debut at Spa Francorchamps in 1991.

Mick has previously driven the Benetton B194 in which his farther secured the first of his seven titles and has twice driven the Ferrari F2004 in which Michael won the last.

With the support of Mercedes, Michael Schumacher got the Spa Francorchamps drive after regular driver, Bertrand Gachot was incarcerated following an altercation with a London taxi driver.

Qualifying a highly impressive 7th, ahead of teammate Andrea de Cesaris, Schumacher was sixth heading into the opening corner, La Source, before suffering a clutch issue just after Eau Rouge.

Such was the impression he made however, following a brief legal tussle by the next race, at Monza, he was in the Benetton finishing fifth in only his second Grand Prix.

With its glorious green Seven-Up livery and distinctive Coke-bottle contour the Gary Anderson designed 191 is still widely regarded as one of the most beautiful F1 cars to ever grace the grid.

Sky will present a feature on Mick's outing, and his father's debut, on 29 August, the thirtieth anniversary of that iconic debut.