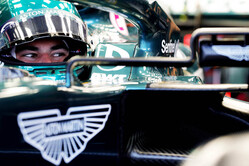 Sebastian: "I'm looking forward to racing at Silverstone again. There's a lot of high-speed sections at this circuit with good places for overtaking, so I think there will be opportunities for some proper racing. It's an important weekend for the team as well, so I'm looking forward to getting started."

Lance: "Silverstone is a real classic. The track is awesome to drive and it's always great coming here because the fans are so passionate. This year it's our first home race as Aston Martin, so I'm hoping we can have a strong weekend and make the whole team across the road feel proud."

A Safety Car has been deployed in eight of the previous 10 races at Silverstone; while there has only ever been one Virtual Safety Car, in 2015. High-speed corners and a tightly bunched pack are often the ingredients for incident - in 2020, there were two Safety Cars in the first Silverstone race; none in the second - the Anniversary GP - a week later.

Despite being a high-speed circuit, Silverstone is usually a good venue for overtaking. Traditionally, most passing happens into Turns Six (Brooklands) and 15 (Stowe). The barely-there corner of Chapel marks the start of a DRS zone down the Hangar straight, allowing for extra overtaking opportunities into Turn 15. In 2020, 57% of overtakes used DRS.

This is a race that's historically hard on tyres. We've seen a wide variety of strategies run out here over the past few years - from one-stoppers all the way through to three-stop affairs. With early incidents likely, expect strategy to be steered by the advent of a Safety Car - as was the case in last year's British GP. This race is also the first weekend for the new Sprint Qualifying format, which will play into team decisions and their use of tyres.