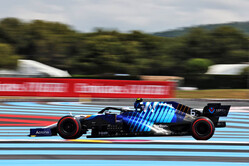 Dave Robson, Head of Vehicle Performance: Today has been about continuing with the aero testing that we began in Baku and confirming that we understand any implications of the new tyre operating procedures technical directive, which was issued to the teams ahead of this weekend. Between Roy, Nicholas and George we have worked through everything: we have no concerns over the tyres, and we will work through the aerodynamic data tonight before confirming the race specification in time for FP3.

Roy drove very well and completed the tests that we needed him to do and his feedback on how the FW43B has changed since he last drove it in Spain is very interesting. George was quickly up to speed in FP2 and able to complete his normal race preparation. Nicholas too had a good day, improving his car for the afternoon session. Both race drivers are reasonably comfortable with the car at high fuel, but there is a little more work to do ahead of qualifying.

George Russell: It's always tricky only doing one session, but I don't feel like I missed out on too much as the conditions were difficult this morning and there were a few errors on track which showed how gusty it was. In FP2 my high fuel runs looked strong and I got into a good groove putting in those laps, but I think there's still more to come from me with low fuel. We'll go away tonight and look to understand how we can extract more out of the car.

Nicholas Latifi: The track was very green in FP1 and the wind caught a lot of drivers out. Initially the car wasn't feeling great, but we made some changes going into FP2 and it was much nicer to drive. The car on high fuel was better than expected, so that's definitely a positive. We'll go away and do our normal analysis tonight and hopefully find some more performance to take into Saturday.

Roy Nissany: It was a productive session, although I do think I could have extracted a little more out of the car. It takes time to build up your confidence after some time away, and Paul Ricard is definitely a track where you need a lot of confidence due to the high speeds and long corners. It was still a very informative session and we got lots of data gathered, so we've learnt some good lessons and being in the FW43B is always great.