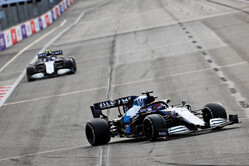 Nicholas Latifi finished 16th in the Azerbaijan Grand Prix, after being awarded a post-race 30-second time penalty for an infraction under the safety car, whilst George Russell was forced to retire due to a gearbox issue.

George started the race 15th and Nicholas 16th, both on the medium Pirelli tyre. Nicholas switched to the hard compound tyre on lap nine before taking the soft compound under a late race red flag.

George pitted on laps 1 and 34, each time for the hard compound, before switching to the soft compound on lap 48.

Dave Robson, Head of Vehicle Performance: Today was a busy race and we have a lot to go through over the coming week. Baku usually delivers a busy race and today was certainly one of those. In the end George was unable to take the race restart due to a suspected gearbox issue and an earlier communication error with Nicholas meant that he received a post-race time penalty.

We tried a different strategy with George to get him some free air and an opportunity to pressure the cars ahead. Unfortunately, he couldn't find enough pace on the Prime tyre to make much progress even though the car was working reasonably well. However, having stopped for new tyres at the first Safety Car, he was in a good position as those ahead began to struggle on their older tyres. Unfortunately, the second Safety Car and subsequent race suspension gave all cars a chance to fit fresh tyres for the final two lap sprint to the chequered flag.

George Russell: Unfortunately, we had a problem with the gearbox which forced me to retire before the race restart. I was just coming to the line and then I had no power, which is especially frustrating after so much anticipation building up before those final two laps. It wasn't meant to be, and that's racing sometimes. We'll go away and analyse what happened.

I was having a good race before that, the car felt fast and I had a lot of confidence in it so there are definitely positives to take away from the weekend.

Nicholas Latifi: It was a fairly lonely race for me today. Before the red flag, we were committing to the one-stop strategy and I was doing what I needed to do managing the tyres. In the end the result wasn't to be, which is a shame as I felt I was driving really well throughout this weekend. On the operational side, there were a few things where we needed to be sharper so it's unfortunate.