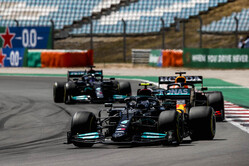 Regular readers will be aware they we do our very best to avoid hyperbole whenever possible, however, we really could be in for an entertaining race today.

Sadly, the race is likely going to be a one-stopper, and we all know that last year Esteban Ocon completed 53 of the 66 laps on one set of mediums.

We can't count on the weather Gods, for the skies are likely to remain blue with just the odd cloud, and nary the slightest hint of rain.

However, if qualifying was anything to go by, we could yet be in for a roller coaster afternoon.

In all honesty we've lost count of the number of times that have been deleted over the last couple of days, the most important occasion being in Q3 when Max Verstappen had his pole-winning lap declared illegal.

Even without the clampdown on track limits drivers have struggled to remain on the black stuff, most citing Pirelli's choice of the hardest compounds in its range, the lack of downforce due to the 2021 aero regs and a track surface that is akin to a skating rink.

The drivers' headache however is our entertainment, and consequently the conditions that have already thrown up a few surprises this weekend look set to throw up a few more.

While Valtteri Bottas starts from pole, based on the previous two races we simply don't have faith in the Finn being a key player. We could be wrong of course, but he really doesn't seem to be 'on it' this season.

As was the case in the previous two races, we expect this afternoon to be about Max and Lewis, hopefully with the support of their respective wing men.

The problem for all of them however is keeping it on the black stuff and pointing in the right direction, for the sort of errors we witnessed in practice and qualifying will be costly this afternoon.

The old adage goes that 'to finish first, first you have to finish', and never has that saying been more applicable.

While there is talk of "going for it", "sending it" and - God strewth - "maximum attack", the key this afternoon is to keep one's head down and do the best job possible.

Due to a combination of factors, not least the reduction in pre-season testing, a number of drivers are having problems settling in at their new homes., the exception being Carlos Sainz, who is already beginning to apply pressure to Charles Leclerc.

The Spaniard starts fifth today, and with the Ferrari currently looking to be best of the rest, has the opportunity for a good points haul. Teammate Leclerc was rightly disappointed with his own qualifying performance, but should also be able to add to the Maranello outfit's tally.

A great performance from Esteban Ocon comes at a time Aline appears to have taken a step forward, though it's hard to judge because the French car might be better suited to the Portimao conditions than its rivals.

Very much an 'elbows out' racer it is going to be interesting to see how the Frenchman deals with a start where he finds himself behind Perez and Sainz, and just ahead of Norris, Leclerc and Gasly.

Teammate Alonso starts from 13th, but the Spaniard's vast experience could yet result in a points finish.

No doubt about it, McLaren has struggled this weekend, and while we have grown accustomed to seeing Lando Norris start from 7th, we share Daniel Ricciardo's shock in seeing the Australian's name down in 16th.

That said, the hard-charging Aussie's efforts to work his way into the points this afternoon should be worth the price of admission alone.

Hard to believe, but 9th is Pierre Gasly's worst qualifying performance of the year, however, are we alone in thinking that this could finally be his opportunity to shine.

Starting behind the Frenchman is Sebastian Vettel, who, despite not having any of the upgrades that have been made available to his teammate this weekend, put the Aston Martin on tenth. Whether this is the point the German finally turns his fortunes around or not remains to be seen, but surely all of us would like to see a little of the old Seb magic.

Another superb performance sees George Russell start from 11th, and surely nobody would begrudge the Briton a points finish this afternoon. Ignoring how he gets that kind of performance out of the Williams, the big question is how he motivates himself race after race.

Antonio Giovinazzi is the quicker of the two Alfas, but think back six months to that blinding opening lap from Kimi, the 2007 world champion working his way up from 16th to 6th.

Behind Giovinazzi, Alonso, Tsunoda and Ricciardo will all be looking to improve, each considering themselves to be out of position. However, the Japanese youngster, who has lost some of his shine since Bahrain, would be well advised to heed our earlier warning in terms of keeping his head down and staying out of trouble.

Whatever else this afternoon may throw at us, the focus still remains on that knife-edge title fight, and with that, other than the challenge of the track conditions, comes the question of strategy and teamwork, both title contenders having had little practical assistance from their teammate so far this season.

The race is likely to be a one-stopper, for two key reasons: firstly because the time lost in the pit lane is too costly to make a two-stopper work, and secondly because wear and degradation on all the compounds seems quite low.

With the Portimao circuit being reasonably wide and presenting plenty of overtaking opportunities (as proved by last year's race when there were 58 on-track passes) the tyre nomination should allow the drivers to push hard and deliver a lively race.

The low wear and degradation should also create quite a wide pit stop window, meaning that the teams will be able to adapt their strategies to take advantage of the best possible moment to make their stops, ensuring track position.

As usual, the timing of the stops will also depend on track and air temperatures - which are likely to be similar to today, or perhaps slightly warmer.

Of the leading ten, The Mercedes and Red Bull duos will start on mediums, as will Leclerc.

As the grid assembles, Russell can be seen in discussion with Toto Wolff. Elsewhere, Adrian Newey is studying the front of the McLaren.

And now Toto is talking to race director, Michael Masi.

Perez is advised that the wind is "notably lower than yesterday". Bottas complains of loose padding next to his right ankle.

Other than Bottas, Hamilton, Verstappen, Perez and Leclerc, Russell, Giovinazzi, Alonso, Tsunoda, Ricciardo, Latifi, Schumacher and Mazepin all start on mediums. The rest, including Raikkonen and Stroll are on softs.

They head off on the warm-up lap. All get away.

They're away. Bottas leads his teammate into T1, and while Verstappen looks at the outside the world champion has it covered.

Behind, Perez is struggling and loses a place to Sainz. While Ocon, having lost out to Norris at the start, is back up to 6th. However, Norris retakes the place with a brave move just a couple of corners later.

At the end of lap 1, it's: Bottas, Hamilton, Verstappen, Sainz, Perez, Norris, Ocon, Leclerc, Gasly and Vettel. Ricciardo is up to 13th.