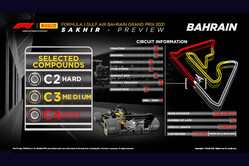 The three middle compounds from the 2021 tyre range have been chosen for this year’s season-opener in Bahrain on some of the most abrasive asphalt of the season.

C2 as the P Zero White hard, C3 as the P Zero Yellow medium, and C4 as the P Zero Red soft. This is the same nomination as last year’s Bahrain Grand Prix four months ago, but there is a new tyre construction this year for the latest cars. The 2021 cars in fact have reduced downforce compared to last year, under the most recent technical rules.

At the recent three-day pre-season test in Bahrain, teams had the entire P Zero range at their disposal, but many chose to concentrate on the three compounds nominated this weekend. With the track having been used so recently, little about it will have changed since the teams were last there: giving them a stable basis to work from.

The new tyres for 2021 have been designed to improve strength and durability, allowing them to run at lower pressures, while the actual compounds are the same as last year. During testing of the 2021 tyres last November in Bahrain, rear tyre pressure was reduced by 0.5 psi and front tyre pressure by 1.5 psi. Then, following telemetry analysis and the reduction of rear downforce in particular, rear tyre pressure was further reduced by 1.5 psi at recent test in Bahrain. This is now confirmed for the race.

The number of sets allowed per weekend is the same as last year (13) despite the there being an hour less of running, with Friday’s free practice sessions now cut to one hour each.

As was the case last year, there’s a standard allocation for every car in 2021: two sets of hards, three sets of mediums, and eight sets of softs. The nominations for every race this year have been revealed in advance.

• The Bahrain Grand Prix gets underway in the evening at 18:00 local time after sunset and is run under floodlights, with track temperatures that can fall quite rapidly once the race gets underway. This in turn affects tyre behaviour and therefore strategy.

• The asphalt (with high granite content) in Bahrain is well-known for being abrasive, increasing tyre wear and degradation. Last year’s race – which featured a red flag and multiple safety car periods – was won by Mercedes driver Lewis Hamilton with a two-stop strategy: medium-medium-hard. Red Bull’s Max Verstappen, who finished second, was one of just two drivers to change tyres four times.

• Sakhir is all about traction and braking rather than big lateral loads. All in all, it’s classified as a medium-severity circuit in terms of demands placed on the cars.

• The third 2022 18-inch tyre test of the year (the second one with slicks) will take place for three days in Bahrain after the race from March 30-April 1. Ferrari will run on the first day, with Alpine running on the final two days.

Mario Isola: "Just four months after having two races in Bahrain, and two weeks after three days of pre-season testing, we're back there for the first race of the 2021 season. During the test we saw many teams concentrated on the compounds nominated for the grand prix, but the conditions we experienced in testing might not be entirely representative of the race.

"The teams also ran a very wide variety of different programmes during just the one condensed session, whereas in the past, with two test sessions, the second session was usually more focussed on tyres. So it's hard to draw many firm conclusions.

"With new specifications of cars and tyres, as well as the shortest pre-season in recent memory, the competition is wide open: especially given that the track characteristics of Bahrain have often resulted in interesting strategic battles, with a number of different tactics used."