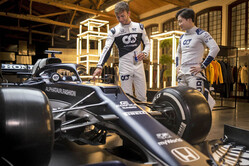 AlphaTauri boss, Franz Tost is in no doubt what the team's target is in 2021, it is to "consistently be at the top of the midfield pack".

Of course, the team comes off the back of a strong 2020, which saw the Faenza outfit score its second ever win and almost beat its legendary Italian rival Ferrari to sixth in the standings.

"In 2020 AlphaTauri was a midfield team," says Tost, "we were fighting successfully against the other teams like McLaren, Renault and Racing Point... but our target for this year is to consistently be at the top of this midfield pack and to improve further.

"To achieve this, we have to avoid reliability issues and finish all races in the points," he admits, the team having had at least one car in the points in all but two races (Hungary and Turkey) last season. "This can only happen if we do not make any mistakes, so we have to be 100% concentrated on our job, race after race, on and off the track, because our competitors are hard to fight."

Referring to the driver line-up, he said: "With Pierre on Yuki's side, we have an experienced driver who can help our Japanese rookie to develop faster, but at the same time we can aim for good results. I think this pair is the best possible scenario to achieve both our targets, and I'm also confident this will be a successful one.

"I reckon Pierre is one of the strongest drivers in F1 nowadays," he continues. "Pierre's good technical understanding allows him to get the best out of the car. Pierre has been with the team for some time now, so he is familiar with all procedures and with our way of working."

Referring to his rookie teammate, Tsunoda, he adds: "We expect his learning curve to be quite steep, so he should be able to achieve a good performance quite quickly.

"Of course, he will have some crashes, that's part of the development programme, but what is very extraordinary on his side is the car control, his strength on the braking and his speed in fast corners. If he continues his learning process, like he did at the tests in Imola and Abu Dhabi last year, I'm sure we will see some fantastic races.

"Yuki can learn a lot from Pierre in all aspects," he added, "for example comparing the lap times, the set-up of the car, the driving lines. This is all very important, especially on those tracks that are new to Yuki.

"If you have a strong and experienced team-mate you can compare many different parameters, which help to improve your own performance."

As for the car, technical director, Jody Egginton reveals how the team used its development tokens.

"We've elected to use our two tokens for a new nose and also redesigned the outboard front suspension, as a result of this we have elected to update some Red Bull Technology supplied steering components to 2020 specification, as permitted by the technical regulations."

Check out our AT02 reveal gallery, here.