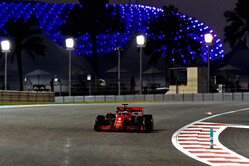 The final Friday of the season was a busy one for Charles Leclerc and Sebastian Vettel, who completed 107 laps between them of the Yas Marina Circuit, home to the 17th round of the 2020 World Championship.

As was the case with the two previous races in Bahrain, the first 90 minutes of track time is less relevant to the rest of the weekend. Charles and Sebastian spent the time working on several fronts, their first tasks involving tests relating to next year, before switching to the normal set-up work. In the second part of the session, the Monegasque ran the Hard tyre while Seb used the Medium compound. Leclerc did 25 laps, the best in 1:39.344, while Vettel did 19, the quickest being a 1:39.670.

The second session got underway at 5pm local time, the same time at which qualifying begins tomorrow and there were even more laps than before with Charles doing 31 and Sebastian 32. Right at the start, both SF1000s ran the Pirelli prototype tyres to be used in 2021, each driver using them for 10 laps. Then the work load was split between the two, with Charles running Mediums and Seb the Hards. In the middle of the session, both men did qualifying simulation runs on the Soft tyres: Leclerc posted a best time of 1:37.508, making him eighth quickest, while Vettel stopped the clocks in 1:38.198, for 15th place. After that, both men did long runs, using the Medium and Hard compounds.

Watching proceedings carefully from the garage today was Robert Shwartzman, the Ferrari Driver Academy talent who will be at the wheel of the SF1000 for the Young Driver Test on Tuesday. Callum Ilott was doing the same from the Alfa Romeo Racing garage, while the newly-crowned Formula 2 champion Mick Schumacher made his debut in the first free practice session with the Haas F1 Team for whom he is racing next year.

Charles Leclerc: "On a track like this, we expected to struggle a bit more, but in fact we seem to be in the mix with the guys we usually fight with. This is probably not going to be as good a weekend as the last one in terms of performance, but it's definitely better than we had expected.

"The balance of the car evolves over the course of the lap, as you have little grip in the first corner and then you gain more and more throughout the lap. Let's work tonight and hopefully we can make a step up for tomorrow. I will also work on my driving as I am lacking a bit of speed here and there, but in the end it's tomorrow that counts."

Sebastian Vettel: "We did quite a lot of work today but we have more to do, as we have still not managed to get the tyres into the right operating window, especially when it comes to the Softs.

"For qualifying I think we will more or less find ourselves in the same position as last weekend. If we are able to put together a very good lap, maybe we can get to Q3, which would be positive for my last race with the team.

"I appreciated Charles' nice touch in running today with a helmet dedicated to me. I hope we can give the fans something to cheer about this weekend."