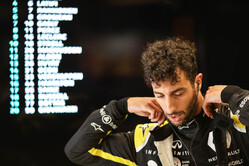 Daniel Ricciardo says that talks with F1 over its handling of TV coverage of Romain Grosjean's crash in Bahrain have been "productive".

Speaking after last week's race, the Australian described the constant replays of the crash and its aftermath - which were not only beamed into homes around the world but into the pitlane where drivers were waiting to resume the race - as "disgusting", comparing the coverage as akin to something out of Hollywood.

This weekend he met up with F1's head of marketing and communications, Ellie Norman to discuss the coverage.

"I spoke with Ellie on Thursday evening," said the Australian. "Already after Sunday they offered to come and chat but last Sunday there was a lot going on, so I wanted to postpone it.

"I think it was certainly worthwhile hearing them out," he continued, "because I do not want to blast them in the media and then run away from them. I chatted for half an hour with Ellie and she went through a lot of stuff, and I gave my feedback.

"There was nothing like confronting," he insisted, "she was very understanding and appreciative and accepted my concerns as well. She did not push back, she was just trying to listen and learn how they can maybe do things differently. But she also talked me through the reasons why they broadcast what they did. I'm sure there are some things we can take from it.

"One thing was - and actually maybe some broadcasters do it - kind of like a bit of a warning to pre-empt the audience, like there's going to be some graphic images, and that way if you have younger kids you have a bit of time to maybe pull them away from the TV or something.

"Ross Brawn mentioned there is something like that, or there is a little bit of a context in place. It was productive they did not attack me or anything like that, so was quite a worthwhile thing. They deserve for me to hear them out."

While he appears to be the only driver to voice his concern, Ricciardo is certain that many of his colleagues share his view.

"I feel like some drivers don't want to see, are too proud or too brave, but I'm sure a lot of us felt it," he said. "That question of getting back in the car? The answer is no. But I just wanted them to consider everything going through what we have to go through as well."

Fact is that crashes sell the sport, indeed, it was in the wake of Imola 1994 that TV viewing figures took off and the money really started to pour in.

Sky has made good use of the Grosjean images throughout the Sakhir weekend, with the inevitable musical backing, the voiceovers in the same sombre tones witnessed on news coverage just before the reporter asks the grieving widow who has just lost her entire family in a fire, "so how do you feel?".

Indeed, as the presenters and pundits ask all and sundry about their thoughts on the crash and its aftermath, one cannot help but feel that were it a courtroom drama, much of the questioning would be termed as 'leading'.

Ironic also, that as Ricciardo suggests there could be some sort of warning before such images are shown, presenters fall over themselves to apologise for the merest hint of a driver or team boss uttering an offensive word.