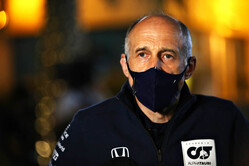 Q: Can we start by getting as word from each of you about that first practice and what the drivers have been saying about this new track in Bahrain?
Franz Tost: Our drivers so far were quite happy with the track. We tried different configurations on the car. We looked reasonably competitive and did a long run as well with the option tyres, and just to be also prepared for the race, to get a picture of what's going on in the race simulation and so far I must say everything worked quite well.

Christian Horner: No specific major issues other than it's incredibly short, it's bumpy and traffic is going to be an absolute nightmare. From a driver's point of view I can see that the track is frustrating in some respects but from a spectator point of view it's going to produce an exciting qualifying and race because the gaps between... when all the 20 cars are on the circuit there is a huge amount of traffic and I think the chance of jeopardy is increased significantly with this type of layout. I can't remember ever having a sub-one-minute lap before.

Otmar Szafnauer: Same with us. I echo what Franz and Christian said. It will be tight out there in qualifying, especially in Q1. We just did a bit of work on one lap pace and did some race sims on the soft tyres as well, some long runs. We have a little bit to learn, come back in FP2, a little bit more tonight and we'll see how we go on Saturday.

Q: (Dieter Rencken - Racing Lines) A question to Christian. When we have look at the dynamic between Max and Alex Albon. Last week Max seemed to be a bit critical of Alex. What is the relationship between them?
CH: Pretty good. They've known each other since they were kids. They're not much more than that now. Since they have been 12-13 they have been racing against each other. Alex won the Karting World Championship one year, obviously Max won it in subsequent yeas and there's a healthy respect between the two of them. They were out karting with the rest of the mechanics, even myself on Monday evening. Max can sometimes call things as he sees it. But there is no issue or no atmosphere at all between the drivers.

Q: Christian, were you surprised by Max's comments?
CH: I think Max just calls facts. I think that's the way he sees it. He said it was obviously a significant gap but he was also stuck behind Sergio who was doing a great job and it's very difficult to follow closely behind a car ahead of you. I think Alex, he was there to capitalise on Sergio's misfortune. It was our first double podium since Japan 2017, so that was great to see from a team point of and it was a solid weekend from Alex.

Q: (Scott Mitchell - The Race) Otmar, Renault is going to test Fernando Alonso in what is ostensibly mean to be a Young Driver's Test after Abu Dhabi. If the rules had allowed it would you have pursued getting Sebastian Vettel in the car in Abu Dhabi or would that not have been possible?
OS: I've got to understand the rules. I was surprised to see Fernando being allowed to test so we have got to have that discussion with the FIA. I think the rules are pretty clear - it's a Young Driver Test and a two-time World Champion almost in his 40s or in his 40s to me isn't a young driver. I've got to understand what the rules are first and foremost and then see what we do thereafter.

Q: Christian, your thoughts on this, please, and if you do end up bringing in a new driver for next year, would you look to run him in Abu Dhabi as well?
CH: It's an interesting... it's one day of testing. Is one day really going to change the world. We're allowed to run two cars there. We had no problem with Fernando driving the Renault as we would really if Carlos wanted to drive a Ferrari or Sebastian a Racing Point. Is one day going to change the world? But as a young driver test, I'm not sure how Fernando... I'm feeling younger already! The fact that he's classified as a young driver, maybe we could get Nigel... he never retired, we could get Nigel Mansell to come and do the young driver test!

Q: And Franz, your thoughts as well please.
FT: We went along with young drivers. This was already planned in a way and there's no other driver we take into consideration.

Q: (Luke Smith - Autosport) Christian, regarding the engine freeze. Have there been any developments in the last few days in terms of where things are standing for that? And given the opposition from Mercedes and Renault at the moment in terms of their convergence mechanism that you and Mattia Binotto suggested, how do you see this situation resolving itself?
CH: Obviously there's been some healthy discussion. Look, you can understand the respect the different positions of most of the manufacturers. Toto, who enjoys an engine advantage at the moment... of course. Naturally he'd want to freeze the engine for the next 35 years if he could. But is that healthy, ultimately, for the sport, to lock in an advantage, particularly for a period of three years, before we get to the new engine, if that engine is brought forward into 2025. As far Renault is concerned, one would have thought that it would make absolute sense for them to support a freeze but I think there's got to be further discussion and hopefully a sensible solution will be reached in the next few weeks.

Q: Otmar, it was a tough race for your team here last weekend and at such a crucial time in the year as well. How have you guys picked yourselves up over the last few days? What have you been up to? What's the mood in the camp as we come into this weekend?
OS: Well first and foremost, we had to understand the failure and the nature that we fix the root cause best we can going into this weekend and next. And then secondly there's a lot of damage that was done on both cars and we had to make sure that we had ample parts to finish this season, like we need to. Those are the two big tasks from last Sunday to now and I think we're in good shape for the next two races.

Q: Franz, Kvyat's future has been the subject of much speculation for weeks. How tough has that been for him and have you been impressed by his resilience?
FT: Dany is experienced, he knows the game and the rules in Formula 1. He is a fast driver and he showed a good performance in the last races and also today, in FP1. I hope that also on Sunday he will be quite competitive and also the race in Abu Dhabi and then we will see.

Q: (Christian Menath - motorsportmagazin.com) Otmar, coming back to the failure you had on Sergio's car last weekend, can you give us an overview how you're coping with the engine parts for the rest of the season? Do you have to sacrifice a bit of power to come through the season without a penalty?
OS: No, it was an MGU-K failure and we had a previous MGU-K that we could use for the next two races, so no hit on performance.

Q: (Dieter Rencken - Racing Lines) Franz, Daniil Kvyat told us yesterday that he was rather shocked when he saw what happened in his mirror etc. We saw you talking to him during the red flag period. Just talking from a team principal perspective, how do you treat or handle a driver after a situation like that?
FT: First of all, I said to him it was absolutely not his fault, that he couldn't do anything, that he should take this on the side and be concentrated on the second start of the race. And he is professional enough and he did it in a really good way.

Q: (Scott Mitchell - The Race) Franz or Christian, whoever is more appropriate to answer it. Yuki Tsunoda looked in good form last weekend and looked it again here but you never know what can happen in Formula Two where there are incidence of unreliability so there is a chance that he will slip to sixth in the championship and the best that I can make out, that would leave him slightly short of the points required for a super licence. Do you have a plan B or a contingency plan to ensure that he can get the super licence points? Are there assurances from the FIA that he will get a licence regardless? How do you handle that situation?
FT: We have a plan B, of course. There's absolutely no doubt that in Melbourne Alpha Tauri will have two cars on the starting grid with two every competitive drivers.

CH: I don't whether you can see, Scott, but I'm so distracted by his moustache and it's now, what, the fourth of December so we're passed Movember. But look at it, it's magnificent! What was your question? As we went into this conference, I think he was on pole position so he's doing a good job, so it's more of a problem for Franz, I think, so he's obviously glued to seeing how that performs.