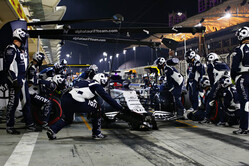 Pierre Gasly: "The main thing about today is to see Romain walking away from that horrific crash at the start of the race. It was pretty shocking to see, but I'm really glad he's ok and I wish him all the best for his recovery and hope to see him back very soon. Performance-wise, I'm really pleased with our job. We took a risky strategy - it was a gamble - but it paid off in the end. It was one of the toughest races and a lot of hard work inside the cockpit today, it was all about managing and pushing as hard as I could, without hurting the tyres too much and keep them alive for as many laps as possible. It gave me a pretty hard time in the cockpit, but we managed to get one of our best results of the year, so I'm really happy to make it back in the points and make the best out of this Sunday."

Daniil Kvyat: "To finish P11 is super frustrating. On the opening lap, I was a bit angry at first with Romain for his move, but then I was just worried about him because I saw the flames and how bad the crash was - I was just hoping he was OK and fortunately it wasn't as bad as it looked. Then on the race restart I had an incident with Stroll. I was fully on the inside of him and even if I think saw me he chose to turn in like I wasn't there. I put my whole car on the inside of the kerb and there wasn't much more I could have done. So, I don't share the same view as the Stewards regarding my penalty. It's a shame they took this decision because it ruined my race. I'm upset but nothing will change the outcome, unfortunately."

Claudio Balestri (Chief Engineer - Vehicle Performance): "Tonight's race was really eventful, with a red flag on the first lap and two Safety Cars. First of all, we are happy that neither accidents, especially the first one for Grosjean, didn't have any major consequence, it was such a relief to see him getting out of the car. As for our race, we changed our strategy at the restart to try to get an advantage from two new sets of the Hard compound which we had available. With Daniil, we decided to be more aggressive, starting on the Option at the restart and using the two new sets of Hards later in the race. Despite the 10-second penalty due to the collision with Stroll, he was able to arrive just out of the points in P11. As for Pierre, he was able to manage the tyres very well to afford only one-stop, finishing the race in a well-deserved P6. We now switch our thoughts to the next race which will again be held here at the Shakir circuit, but on the new challenging outer-circuit, where we expect another close midfield battle."

Franz Tost (Team Principal): "Today we saw a very heavy accident at the start for Romain Grosjean, who, fortunately, was able to jump out of the car without any major injuries. Without a strong monocoque and the halo, the consequences might have been much worse, so a big thank you to the FIA for constantly improving the safety of the cars. As for our race, we started from P8 with Pierre and P10 with Daniil. Both of them didn't have a great start and lost some positions, especially at the first corner. Then Daniil had the collision with Romain, who approached from the left to the right-hand side of the track, touching Daniil's front left wheel before going off into the barriers. After the red flag, Daniil restarted on the Options. Then he had an incident with Stroll, who, in my opinion, came quite aggressive to the inside and I don't think Daniil could have done anything to avoid the collision. He received a 10-second penalty and his race was compromised. Daniil wasn't quite happy with the Option tyre as he felt he didn't have enough grip, so we called him in again to switch to the Base tyre. Again, his car didn't perform that well on the Base tyre either. In the end, Daniil finished just out of the points in P11. With Pierre, we changed our strategy and for the second start we sent him out on Base tyre, calculating that maybe he could pull off a one-stop. It was a bit risky, but everything worked very well on the Base tyre and we called him in on lap 25 to change to another set of the Base compound. It was a successful decision because he really felt good on that tyre, and he could finish the race in P6. Pierre and the team deserved a rewarding result as they did a great job all weekend. Last but not least, it's good to see Red Bull Racing achieving a double podium finish today. I'm very pleased for them, especially for Alex after his accident on Friday, as this will be a boost for his confidence."