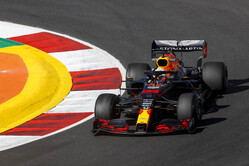 A dramatic first day of practice at the Portuguese Grand Prix saw Aston Martin Red Bull Racing and Scuderia AlphaTauri both show pace but both have incidents.

A new circuit offered up a new challenge to the drivers in Portugal, and it was clear they were all pushing to the limits with both Max and Daniil having spins when the track grip was low in FP1. Despite those moments - and Pierre needing to cut his running short due to an issue on the chassis side - we ended up with three of the four cars in the top ten, with Max third, Alex fifth and Pierre in tenth place. Daniil was 13th, just over a tenth slower than his team-mate.

The first 30 minutes of FP2 were dedicated to Pirelli tyre testing, with prototype compounds being used by all the teams. This was a blind test, so both Red Bull and AlphaTauri simply had to follow the run plans given to them by Pirelli. In the final hour, we could work more on set-ups and the approach for the rest of the weekend, but Pierre was forced to stop on track as his car caught fire, leading to a red flag. We know the initial incident was caused by an electrical blackout on the car, We are now carrying out out a full physical check on the PU itself.

Shortly after running restarted, Max was caught in an incident with Lance Stroll at Turn 1 when the Racing Point turned in with Max on the inside. The stewards later decided no one driver was particularly to blame, so no further action was taken. The collision meant Max could not continue his low fuel run on soft tyres as the red flag was needed once again. Max still ended up second fastest behind Valtteri Bottas, but without having set a representative low fuel lap. Pierre was seventh and Alex tenth as again we had three cars in the top ten despite the disruption, while Daniil was another driver unable to do a clean qualifying simulation run and was 17th.

Toyoharu Tanabe, Technical Director: "The Algarve track is definitely very interesting and I think all the drivers are enjoying the challenges it presents. Over the two sessions we focused on tuning the PU and chassis to suit the requirement of this circuit. Our work on the PU side began, based on the results of simulation work and we were gradually able to combine it with actual data from the track to optimise performance. We used our experience of tackling a new venue gained at Mugello and Nurburgring which meant we were able to move on to more detailed work. As usual, we will analyse everything in detail tonight. As for Gasly's incident in FP2, we know it was started because of an electrical blackout on the car. We are now carrying out a full investigation on the PU and chassis to try and identify the precise cause."