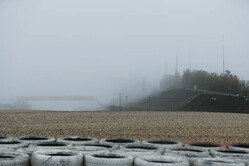 The weather was against us on Friday at the Eifel Grand Prix as no running took place due to poor conditions meaning the medical helicopter was unable to fly.

Low cloud and persistent rain throughout the day saw both practice sessions come and go without the pit lane opening, meaning both Aston Martin Red Bull Racing and Scuderia AlphaTauri will be faced with the prospect of a two-day race weekend at the Nurburgring.

This is not the first time we have lost a day of running, with a similar situation at the 2017 Chinese Grand Prix wiping out virtually all of Friday practice. Saturday at last year's Japanese Grand Prix was also canceled in advance due to Typhoon Hagibis, with qualifying held on Sunday morning.

The teams will now adapt their run plans to deal with the shortened practice opportunities in Germany, but it at least acts as a precursor to the race in Imola in three weeks, where the schedule is also for a two-day event and just one practice session ahead of qualifying.

Toyoharu Tanabe, Technical Director: "It's unfortunate that we could not run at all today at this first Eifel GP, as conditions were too poor for the medical helicopter to fly. For the second consecutive race, fans have been allowed into the grandstands here and it was a shame they did not get to see any action, having waited patiently all day. This is the first race at this track in the hybrid era, so the three hours of practice would have been very important in terms of gathering data. But the situation is the same for all the teams and now we hope to do as much running as possible in FP3 in order to prepare for qualifying and the race."