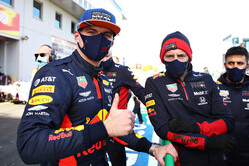 A closely-fought qualifying session saw Max briefly on pole in the closing stages, but in the end he had to settle for another third place.

Saturday was a particularly busy day after all of Friday's running was cancelled due to the weather conditions, meaning FP3 was the only practice session ahead of qualifying and the race. Final practice showed that it would be tough for the Scuderia AlphaTauri pair to advance to Q3, and although all four cars made it safely through Q1 that's how it proved. Pierre and Daniil were both just 0.07s apart in terms of lap time, and within 0.04s of Sebastian Vettel's Ferrari in 11th but were unable to make any further progress and will start from 12th and 13th respectively. The air temperature did not reach double figures on Saturday and the forecast looks more unsettled on Sunday, but if it remains dry then both AlphaTauris will have a free choice of tyre compound for the start. Max and Alex had looked competitive throughout the session, and continued that form through into Q3 where Max set the provisional pole position time on the first runs, with Alex in fourth place. The final runs saw a close fight for pole but Max just couldn't quite find enough time in cold conditions, slipping to third place. Alex will line up directly behind him in fifth, with all of the drivers in the top ten starting on soft tyres to try and deal with the cold temperatures. And for those of you who love records and statistics, a little bit of history was made today which involves Honda. Until today's qualifying, the record for the fastest F1 qualifying lap dated back to 2004 when it was set by Takuma Sato no less, at the wheel of a BAR-Honda in 1m 27.691s. Today, Valtteri Bottas lapped the Nurburgring to take pole in 1m 25.269.

Toyoharu Tanabe, Technical Director: "Although we were unable to run yesterday, due to bad weather, today in much brighter conditions, we had a dry FP3 and qualifying, even if temperatures were still very low. It meant we only had the one hour in the morning to fine tune the car-PU package for qualifying and the race. Added to this was the fact that it was the first time to run the hybrid PUs at this track, so that made it even busier. In order to make up for yesterday's lost time, we came up with a new programme and got through everything we wanted to do. It was also good practice for when we have an official Two Day Grand Prix meeting in three weeks time at Imola.

"Max produced another very strong performance and Alex also did well for Aston Martin Red Bull Racing, to claim third and fifth on the grid. Unfortunately neither AlphaTauri made Q3 today, however, 12th and 13th is still respectable and gives both drivers a free choice of tyre for the start, which means they should fight for points.

"Low track temperatures are expected again tomorrow but we have enough data from both the chassis and PU side to be prepared for any conditions and are ready for a competitive race."