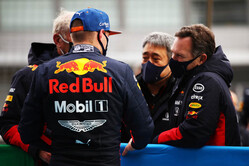 A hard-fought Eifel Grand Prix yielded another podium for Max and a top-six finish for Pierre on a day of mixed emotions for both Aston Martin Red Bull Racing and Scuderia AlphaTauri.

While Max and Alex both started in the top ten on soft tyres, the AlphaTauri pair of Pierre and Daniil had free choice in P12 and P13 respectively so both started on the medium compound. At the start, Max attacked Lewis Hamilton but settled into third place and kept the two Mercedes cars ahead honest, while Alex slipped back to run sixth. A lock up on the first lap gave Alex a big flat spot that meant he was forced to make a pit stop on lap seven for safety reasons, switching to medium tyres while the other three cars ran longer.

Unfortunately, as Alex was fighting back through traffic he misjudged a gap after overtaking Daniil on lap 16, clipping the AlphaTauri's front wing and breaking it off. Daniil was forced to do a whole lap at slow speed and came in for a new front wing and hard tyres to try and salvage something from the race. After Alex was given a five-second time penalty for the incident, some debris then pierced his radiator system and led to rising temperatures that meant he had to retire the car. That left two cars fighting in the points, with Max climbing to second place after Red Bull cleverly took advantage of a Virtual Safety Car (VSC) period. Valtteri Bottas had made a mistake and needed to take an early first stop, but a brief VSC soon after offered the team the chance to bring Max in and lose less time, emerging behind Hamilton but ahead of Bottas.

Pierre ran long on the mediums but then switched to a set of hard tyres at the halfway point, and had climbed into the top eight when Lando Norris retired to trigger a Safety Car. At this point, Max, Pierre and Daniil all stopped for soft tyres with 15 laps remaining. Max held onto second while Pierre made excellent progress, jumping Romain Grosjean instantly at the restart and then pulling a great move around the outside of Charles Leclerc with nine laps to go to take sixth place. Unfortunately for Daniil, he was unable to recover any further as the rest of the drivers ahead of him could also fit fresh rubber late on and was classified 15th. Max also grabbed an extra point for setting the fastest race lap, on the very last lap of the race.

Toyoharu Tanabe, Technical Director: "Today's Eifel Grand Prix was held in exceptionally low ambient and track temperatures. Starting from third, Max produced another excellent second place finish for Aston Martin Red Bull Racing, just as he did two weeks ago in Sochi. He also set the fastest race lap right at the end of the Grand Prix, which is a good sign for the upcoming races. For Scuderia AlphaTauri, Pierre drove a very strong race to go from 12th on the grid to sixth, thanks to several exciting passing moves. His and Max's performances are both very encouraging for the rest of the season. Unfortunately, Daniil and Alex were less successful this afternoon. In fact, Kvyat's race was compromised when he lost his front wing after the collision with Albon and later, the team decided to retire Alex, after debris caused a radiator to leak, which led to a PU issue. In two weeks' time, we go to what is another brand new venue for F1 in Portugal, therefore we will be doing a lot of simulation work to prepare for it to the best of our ability. Finally, on behalf of Honda, congratulations to Lewis Hamilton on the great achievement of equalling Michael Schumacher's record of 91 F1 wins."