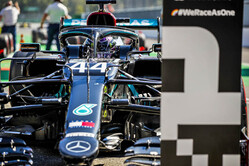 With the media having thankfully moved on from that "dream" move to Ferrari, and no other realistic options available, Lewis Hamilton is set to continue with Mercedes.

However, with no news forthcoming the media is getting restless, though the world champion insists that securing his seventh title is his main priority right now.

"I guess at some stage we have to sit down and have the conversation but it's not a priority right now," he told reporters in Portugal, "getting the job done for me this year personally is the priority. That's what I'm solely focused on right now."

"Negotiations are never an easy thing for most people," he admitted, "having to go into an office and sit with your boss, it's never an easy position to be in. I don't particularly feel uneasy about it, I've done it multiple times now. It's just when the time is right, we'll do and get on with it.

"At the end of the day I've always been committed to this team and completely transparent," he added. "I haven't spoken to anybody else, I don't plan to, and at some stage Toto and I will sit down and work out our path moving forwards.

"We have achieved quite a lot together and it's quite remarkable what we've done together over these years and we are still not done."

However, though he is clearly keen to stay put, the Briton admits that he is unsure how long he wants to commit for.

"Do I want to continue for three years is also a question," he said, "and there are many, many questions still to be answered.

"I think if you look short term, you could say there are going to be companies and businesses that are going under during this time," he admitted, a clear reference to the impact of the pandemic. "Mercedes are, I would say, on the climb back. They're now in a much better place, but everyone has had a big hit this year.

"But if you look at the future, the future's bright. I think there's going to be some changes. You see I think (Daimler CEO) Ola (Kallenius) came out with a new plan that Mercedes has moving forward in terms of sustainability, in terms of pushing their cars more to electric, and the same with AMG. I think the future is bright.

"These are all things we will naturally speak about, but I think I've earned the right or the position so far to be able to stay for a decent amount of time.

"Time will tell. I can't really say too much more. Hopefully you'll hear something in the next couple of months."