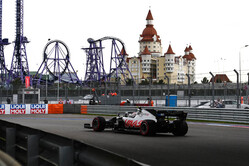 Haas F1 Team drivers Romain Grosjean and Kevin Magnussen qualified 16th and 18th, respectively, for Sunday's Russian Grand Prix, the 10th round of the 2020 FIA Formula One World Championship at the Sochi Autodrom.

Grosjean led the way for the Haas F1 Team duo in Q1 setting the 16th fastest lap of 1:34.592 on his second set of Pirelli P Zero Red softs in the session. The Frenchman had his opening timed lap of 1:34.980 deleted due to exceeding track limits at turn two and he subsequently aborted his second attack on his first set of softs. Magnussen ran wide at turn two on his maiden run - negating his initial lap, but he bounced back on his second flying run to set a 1:35.130. The Dane bettered that time on his second set of Q1 soft rubber - clocking a 1:34.681 for 18th on the timesheet.

Lewis Hamilton of Mercedes claimed the pole for the Russian Grand Prix, the eighth top spot of 2020 for the six-time World Champion and the 96th pole position his Formula One career. His Q3 fast lap of 1:31.304, a new track record, beat Red Bull Racing's Max Verstappen by .563 of a second.

Romain Grosjean: "I think I got the most out of the car to be fair. We were struggling yesterday; we were more than a second off P19. We made a good step this morning. We changed parts and so on, but it still wasn't as good as I wanted it to be. We made a few more changes going into qualifying and we've actually done very well. The car felt much better, it was much more together, so I'm happy in that aspect. I'm hoping things can happen at the front in the race tomorrow and we can hopefully score from that. On raw pace there's no chance for us to get into the top 10 if nothing happens, but obviously we need to be ready if there are any opportunities, we need to do our best and get them."

Kevin Magnussen: "It wasn't a good qualifying. We've had decent pace in the car all weekend but then in qualifying we couldn't make the tires work on the first lap. I had lots of traffic on the out lap of my final run. The tires were just too cold. We needed another lap and we just didn't have that. None of the laps were optimum. It's not satisfying but it just didn't come together in qualifying. I don't know if we look super strong for the race despite a decent FP2 yesterday on the long runs - we look to be where we usually are. We'll just try hard again tomorrow."

Guenther Steiner: "I guess it's one of those chapters where the struggle continues. We know on a good day we can get into Q2, obviously it wasn't a good day given we finished 16th and 18th. For now, we keep on fighting and try to squeeze everything out of what we've got. The drivers put a big effort in, as did everybody, and that's what is important to me - that we keep on trying. We need to keep doing that until we see better days."