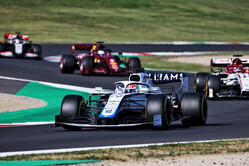 George Russell finished 11th in an action-packed Tuscan Grand Prix at Mugello. Nicholas Latifi's race came to an unfortunate end early on with the Canadian caught up in a four-car accident on a safety car restart.

Dave Robson, Head of Vehicle Performance: At the end of an incident packed race we are disappointed not to have finished in the points. We anticipated a complicated race and had prepared accordingly, but we couldn't quite take full advantage.

Both cars started well and made good progress on the opening lap, running 11th and 13th when the first safety car was deployed. At the subsequent restart, Nicholas was very unlucky to get hit by the cars behind as the pack concertinaed approaching the control line. With George, we made good tyre and strategy decisions throughout the race to get him to ninth place at the second safety car, and in a position to race Leclerc for eighth. Frustratingly the subsequent red flag lost us track position and allowed Grosjean and Raikkonen to un-lap themselves. We had a poor final stint, losing places at the restart and then struggling to overtake Vettel.

Overall, we did a good job this weekend and worked very hard to deservedly get ourselves into a strong position in the race. We now need to refine the small details to elevate our race performance from very good to excellent.

George Russell: It's such a shame as the race was under control, and I was in P9 before the last red flag. I was driving like hell, everything was stable, the tyres were good, and I was ready to bring the car home. With the last restart, we had some wheel spin and this made the final stint very diffciult. I am disappointed for myself and the team as I feel like we deserved that. Under normal circumstances with the great initial start we had, we would have been in the points.

Nicholas Latifi: For the restarts at this track, we knew that the leader was going to go as late as possible because of how far forward the line is along with the slip stream effect. When you are in the middle to the back of the pack, the concertina effect is always much more exaggerated especially as these cars are so fast. I almost hit Kevin (Magnussen) in the apex of the last corner when everyone braked again, and then again it seemed that everyone went, and you are just reacting to the cars around you. The cars ahead then braked once more and there was nothing that I could do to avoid it. It is unfortunate because we avoided the chaos at the start and picked up quite a few positions. I was excited to see how the race was going to unfold, but that is racing sometimes.