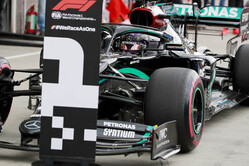 Today would appear to mark the last time that Mercedes duo, Lewis Hamilton and Valtteri Bottas can use their infamous 'party mode', the engine setting that has helped them to dominate Saturday afternoons for as long as anyone can remember.

The move is part of the sport's bid to level the playing field while also reducing spending, and while Hamilton and Bottas claim it will make little difference we should find out in just a couple of weeks when the ban is introduced in time for the Belgian Grand Prix.

Christian Horner, whose Honda-powered cars are currently regarded as the biggest threat to Mercedes, believes the ban is a good move.

"It will affect all teams, the question is how much," the Red Bull boss told reporters.

"I think these qualifying modes have been pushed and developed over the years," he continued. "There's inevitably enormous cost that's associated with developing these different modes.

"With exhaust blowing for example, we had to run a standard map throughout weekend. And I think this is just adopting a similar methodology to that, which I think is sensible for Formula 1.

"I think it's a healthy thing for the manufacturers and if anything, if it creates better and closer racing it's a positive for Formula 1."