Vettel: We will continue to fight 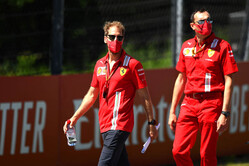 Even before the circus arrived in Austria there was speculation that knowing he was leaving Ferrari at season end, Sebastian Vettel might opt to look after his own interests moving forward rather than Ferrari's.

Consequently, when he contradicted Mattia Binotto's claim today that he and Ferrari had failed to reach an agreement on a new contract, insisting that he hadn't even been offered a new contract, the speculation intensifies.

The German then laid things on the line, explaining that should he be instructed to yield to his teammate, he might not necessarily play ball.

"Should the situation arise and make sense I think you'd expect both drivers to help each other out," he said. "I don't think that has anything to do with the fact that my contract expires and I'm going to be leaving the team.

"But at the same time you're racing for yourself," he added, "you know, not trying to make Charles' life easier on track in terms of waving him by.

"We have been fighting each other in the past and we will continue to do so," he added.