Season restart will be challenging 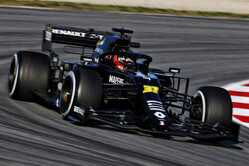 The desire to finally get the 2020 season underway isn't just about giving fans something real to watch after weeks of various virtual versions of the sport.

While the teams are not racing they are not earning, and at a time there are genuine fears for a number of them, F1 itself admits that it is suffering from the lack of on-track action.

But should the green light be given for Austria and beyond, simply getting up and running again will be a challenge admits Renault boss, Cyril Abiteboul.

"When there comes a time to move away from shutdown and restart activity, costs will creep up," he told the official F1 website. "We will have to un-furlough people and it may be at a time when revenues do not creep up in the same way, so that might be a more challenging time than the time we have had so far actually.

"There will be a number of costs and burdens associated to moving out of shutdown and producing all the parts," he adds. "It may be more difficult for some teams than other teams, the smaller teams, independent teams may struggle more with cashflow.

"That's why it's so important that when we decide to come back and resume activity, we don't do it for one race, we do it for what we can salvage for a season.

"The amount of notice needed depends on if we have to do a number of back-to-backs," he revealed. "If we're not in a position to ship some parts that easily, if we are not in position to produce parts simply because we have to respect social distancing in the UK and so on, it may take a bit longer.

"We have to review our plans, which is why it is so important to have a bit of notice, so we can adjust our plan to our capacity and also to our ambitions.

If we race, we have certain ambitions from a sporting perspective, but I would say that generally with four weeks of notice, we can be ready to cope with any situation."

In terms of the team's competiveness, the Frenchman insists pre-season testing was positive.

"I need to manage expectations," he said, "but it is true, at the test we generally had a good feeling. We ticked all our boxes, but those boxes are also very dependent on what other people are doing.

"One question left unanswered was the relative competitiveness of our car and we were only expecting to find out in Melbourne on Saturday afternoon. Obviously that didn't happen. We're very curious to find out."

Like its rivals, the pandemic has left its development schedule up in the air, a schedule that was likely to witness an upgrade in Vietnam and a further upgrade for the Zandvoort race.

"We were up for a very aggressive development plan," he says. "We're very keen to get the factory up and running again so we can resume that activity. The figures looked very good in the wind tunnel and production was very busy producing race three and race five package.

"All of that is completely up in the air, so that is the situation we have. But again, lots of people have bigger frustrations than those ones, so we need to accept we need to be a bit patient."