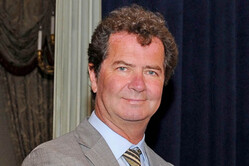 Founded in 1996, Carlin Motorsport has won countless team and drivers' titles in various disciplines with the likes of Lando Norris, Jean-Eric Vergne and Daniel Ricciardo, while its roster of rising stars over the years has included Nico Rosberg, Sebastian Vettel, Robert Kubica, Takuma Sato and Kevin Magnussen.

Though Carlin has never entered F1 it has come close on two occasions, most recently in 2011 when the FIA was seeking to lure teams with the prospect of cheaper engines and a level playing field. Then again, it is no doubt his failure to follow fellow team owners into F1 - and ultimately financial failure - that has allowed him to continue his winning ways.

Currently contesting a whole range of series, including IndyCar, F2, F3 and the European Le Mans Series, team owner, Trevor Carlin, who began his career with Bowman Racing before joining West Surrey Racing, knows a thing or two about motorsport, and in the current climate the Briton fears for its future.

Moments before boarding his flight to the United States for the opening round of the 2020 IndyCar season at St Petersburg, news broke of the situation in Melbourne.

"I went to the gate and the phone just went mental with McLaren news and the Australian Grand Prix," he tells CityA.M. "It seemed to have a domino effect around the world.

"(IndyCar) pretty much cancelled within hours, it all fell apart," he adds.

Other than the cancellation of the subsequent races in Birmingham, Long Beach and Austin, Carlin's operation is facing up to the harsh economic reality as other series are halted, not least those he contests that support rounds of the F1 world championship.

"I've got a skeleton crew in the factory to get the cars prepared and doing factory maintenance, and then I'd expect in a week we'll probably have to close down as well," he reveals.

"If the cars aren't running, then sponsors have no reason to pay," he admits. "They'll probably start delaying payments and then we're on a bit of a knife-edge financially.

"If it goes on for six months there's a chance the team won't exist. Hopefully it won't be six months but the whole industry is on a knife-edge.

"But motor racing is one thing at the end of the day everyone's livelihoods are at stake."