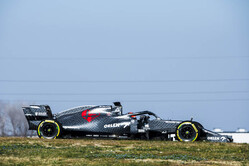 With testing reduced to six days this year - as opposed to the eight days of recent years - time in the car is at a premium, and while a number of teams have yet to reveal their schedules it is unlikely that their test and reserve drivers will see much avction in the next two weeks.

However, at Alfa Romeo, Kubica, who brings sponsor Orlen to the Swiss outfit, will get proceedings underway tomorrow morning, before handing over to Antonio Giovinazzi at lunchtime.

While the team revealed its 2020 contender last week at Fiorano, it was sporting a special camouflage livery, the car to be unveiled proper tomorrow morning before testing gets underway.

Other than Alfa Romeo, Ferrari, McLaren, AlphaTauri, Racing Point, Haas and Williams have revealed their driver line-ups for this week's test, the American outfit, like Alfa Romeo, due to reveal its car ahead of tomorrow's action.