Abiteboul plays down non-appearance of R.S.20 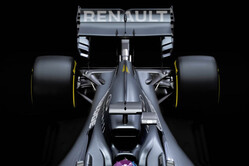 Rather than turn launch season into something spectacular, an event - or series of events - at which the sport could seriously whet the appetites of fans... sponsors... broadcasters and the media, with each year the unveilings become more and more of a non-event.

Thank heavens Ferrari opted for something dramatic rather than releasing a couple of renders, though even the acrobatics and music of Tuesday's event fell some way short of the spectaculars witnessed in days gone by.

While Renault staged a presentation in Paris, at which the drivers were joined by senior personnel, there was no car. Instead, as it was explained that the R.S.20 would be revealed at next week's test (well, duh!), we were given a couple of darkened renders from which it was almost impossible to discern anything of real note.

As the Red Bull RB16 roared around Silverstone, the Austrian team issuing a number of (almost) live images and videos to the waiting world, Cyril Abiteboul explained the reason for the non-appearance of his team's contender.

Asked if the car's absence meant that the French team was behind schedule and wasn't actually ready, he said: "If anything we are much more on schedule than we were last year.

"You may remember that last year we invited you guys to come to Enstone and actually I mentioned how late we were. And that was a fact," he added.

"It was also something that impacted reliability at the start," he continued, "because, when you are late, you are reacting and it is all about trying to catch a train that's gone anyway. So this year we are ahead of schedule."

Fact is, other than the liveries - assuming that none of the current sponsors does a Rich Energy - the cars that appear in Melbourne - and even the second week of testing - will bear little resemblance to what is seen at the launches.

Nonetheless, that doesn't stop some sections of the media waxing lyrical over the "exciting innovations" shown at the launch, yet often never seen again.

"After last year, I read what you wrote," said Abiteboul, "and I read what people say about what you write about the pictures that we post, and I got extremely frustrated from people, you know, really reacting to the cars as though they are the real thing.

"Actually, no one is capable of presenting a true car," he continued. "If your team in on schedule, you don't have a car waiting here for a couple of hours or days. Your car is built and going straight to Barcelona. That is an optimised schedule.

"So on that basis, our only option was to have a fake car, a show car altered to look like this year's car. But that is a waste of money and the results will be frankly below optimal.

"Plus people will always interpret based on that. So rather than that, no car. For anyone interested in the car, look at the pictures next week."