DRS issue down to crashed server 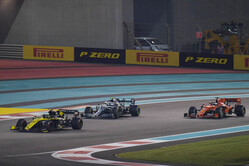 It is somewhat ironic that at a time some were claiming that the Yas Marina track is one of the few circuits where DRS has improved the racing, a technical fault meant that it was not available for the first 19 laps of the race.

As a result drivers had to either sit tight and hold station, reminiscent of Fernando Alonso in 2010, or try some old fashioned methods such as late braking.

However, even when the aid became available, around a third of the way through the race, there remained issues.

"The simple part is a data server crashed," explained race director, Michael Masi. "The timing still operated fine as we all saw but that crashed and we immediately disabled it and until we were 100 percent confident that it was all, not only back up and running, but back up and running with the correct data available, that was when we re-enabled it.

"We ran various checks collaboratively between the FIA and F1 group to make sure everything was working hunky dory," he added. "Until that point in time we were not going to take a chance until we were confident."

"It is the first time that it is happened," he insisted. "Before anyone asks, yes there is a backup but the first part is to actually identify what the first issue was and as we all know with any backup system there is a lag in things clicking over."

Users of the wretched F1 TV and Timing App services will no doubt smile at the thought of the race director's frantic messages to the relevant technical team during the race, being met with the standard, 'have you tried uninstalling and then reinstalling' and 'have you tried clearing the cache' messages, in addition to the 'we will pass this on to our team' follow up.