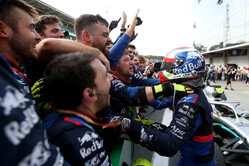 Pierre Gasly: "This is just incredible! My first podium in Formula 1 and with Toro Rosso. I kept working every race on myself, I always thought that if I could be in the right place at the right time something will come, and today it happened, it's just amazing - I have so many emotions! I've always said the team is my Italian family, I love their spirit and passion, they always push like hell and today was the best present I could give back to thank them for their massive constant effort. You dream a lot about being in F1, you dream about your first podium, but then when it happens all of the emotions coming through me are just unpredictable, it's just the best day of my life right now. I want to send a huge thank you to everyone who has supported me since the start of my career and have gotten me to where I am today."

Daniil Kvyat: "Starting from P16 I knew it wasn't going to be easy today. There not much to say, it was a difficult race until my safety car restart on the last lap, as I was able to overtake three cars, getting at least one point. It's the second podium for Toro Rosso this year and I think we are the only midfield team who achieved that, so we can be really pleased with our effort. We scored many points today, taking back the sixth position in the Championship. Today's result is a great achievement for the team."

Claudio Balestri (Chief Engineer - Vehicle Performance): "What a Race! This is a great day for Toro Rosso and Honda. It's thanks to a fantastic team effort here at the track, in our Operations Rooms in Faenza, Bicester and in Sakura that we could achieve such an amazing result together - the second step of the podium! Today we didn't make any mistakes; we had a good start, good pace during the whole race, we managed our tyres when the track temperatures were very high, especially at the start. Pierre drove impeccably and was able to keep Lewis (Hamilton) behind in an incredible last lap, finishing his race P2. Amazing!

"As for Dany, his race was a bit more difficult, having to fight with all the other cars around, but he was able to finish the race in P10, bringing another point to the team. Now we will go to Abu Dhabi on a high and ready to fight again. Fifth position in the Constructors' Championship is not unreachable."

Franz Tost (Team Principal): "It was a fantastic race today, especially for the spectators as the safety car periods really made it a show, very exciting. Toro Rosso, Honda and Pierre Gasly together showed a fantastic performance. Pierre was competitive straight away, from Friday onwards, and he showed great pace again yesterday in Qualifying, where he finished the session in P7. He started from P6 on the grid (due to LEC's penalty) and he had a good start to the race, with a very clever first stint in managing his Option tyres and avoided overheating. On his first pit stop, he changed to the Prime tyre and he had even better pace than expected, and then on the last set of Options he already had a five-second advantage over the others. He reacted well to Kimi Raikkonen's challenge because he was able to pick up the pace and go a couple of tenths faster to hold his position - this was very impressive as he was able to do this without overdriving and overheating the tyres. It was a great drive from him, so he really deserves his second-place finish. Ferrari and the others have certainly helped, but Pierre anyhow had the pace to finish in P5 or P6 without these collisions, and today he drove his best race at Toro Rosso. Daniil's race was much more difficult, but he was able to score a point. It was tricky for him on the Prime tyres because it took a long time to get t hem into the ideal working range, and it was the same for a few of our competitors as well. On Options it was much better, and I think that without the safety car he could have had a chance to finish further ahead. Having said this, we are still happy with the point he scored as it also helped reclaiming the sixth position in the Constructors' Championship. I also want to congratulate Aston Martin Red Bull Racing and Max, for their amazing victory. We are looking forward to Abu Dhabi now, where we still have a chance to fight for an even better position. Let's hope we can find a good setup and put everything together for the last race of this season."

Masamitsu Motohashi (Honda Chief Engineer for Toro Rosso): "At the very end of the race, we managed to get second place with Pierre after a very close fight with Hamilton. Really, I am lost for words. This is our second podium of the year with Toro Rosso, which is a wonderful achievement and it puts them in a very strong position to finish at least sixth in the Championship. At the start of the weekend, we had some PU issues, but thanks to the hard work of everyone in the team and our Honda crew, we recovered well and this is a great reward for all the hard work. We have worked with Pierre for the past two seasons now and so this is a great result in what was in some ways a difficult year for him. Our congratulations go to him and our friends at Toro Rosso and let's not forget that Daniil also managed to finish in the points. This is a great boost for the team, but we must now aim to do even better next year."

Toyoharu Tanabe (Honda F1 Technical Director): "This is our first win in Brazil since Ayrton Senna's epic victory in 1991. Today's win was down to an aggressive and intelligent race from Max and a well-executed strategy from the team. To take a third win this season is a great result for everyone at Honda and Aston Martin Red Bull Racing. Congratulations also to Pierre Gasly on a fantastic drive in which he got the most out of the car to record his first F1 podium and also to Toro Rosso for their second top three finish of the year. Pierre performed well throughout the race especially in that last lap fight with Hamilton, which I'm sure will be a real boost for him. I am happy for him in what has been a difficult year. The car-PU package worked very well with both our teams and that has to be a good sign for the final race of the season and when we look ahead to next year. We would like to dedicate this win to our founder, Soichiro Honda, whose birthday it would have been today. Finally, congratulations to McLaren, with whom we scored that last win in 1991, for finishing on the podium today."