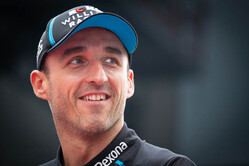 While his return to F1 wasn't quite the fairy-tale any of us had wished for, it wasn't the disaster that some had predicted.

Finally offered a return to the F1 grid, it just so happened to be at a time that Williams was going through one of the most torrid periods of its long, illustrious history.

Having revealed that he will not be on the grid next season, Robert Kubica may yet secure a simulator role with Haas, and though he admits that his dream is at an end, the Pole insists that he has proved the doubters wrong.

Asked how he reflects on his season, the Pole told reporters: "I think the general picture is massively hidden by what we went through this season and many things did not help and actually did influence in a negative way what I was able to do.

"But coming back to a competition sport, as Formula 1 is, on the highest level of motorsport, after a long time and with my limitations a lot of people did not even think I would be able to race," he continued.

"I heard many stories that in Turn 1 that I will not be able to react to situations and probably the opening lap is one of the things, which I managed well this season.

"I heard rumours that I would not be able to race in Monaco, and probably Monaco was one of my best drives during this year, although I was still far behind.

"But feeling-wise it was positive. I'm leaving this season, of course not happy with the general performance, but pretty happy with how my body, my mind and my brain reacted to the difficult challenge I had this year."

Reflecting on the trials and tribulations of his team, Kubica, who, despite being out-performed by his teammate for much of the season, particularly in qualifying, seems set to be the scorer of Williams sole championship point this year, said: "Every member of Williams is not happy with what we have seen this year.

"The team is working hard but it is not an easy season. There are many things which we could probably handle better. But there are also things which I think that although the season has been difficult we have handled in a good way.

"I think the guys on track always did a very good job with what we have, especially in the beginning of the season it wasn't easy and the group stayed strong, united and very, very positive, which is good to see in such a difficult period.

"Definitely we need to improve what we get, the pace of the car, and then everything will become easier. And also for the guys on track the work will be more easier; more fun.

"Of course this will not happen with me, as I'm leaving Williams, but I hope this team will improve their situation for the future, especially because the guys they deserve it. They are really good people and they are working hard, so I hope good times, or better times, will arrive soon for Williams."