"I was expecting it," admits Leclerc 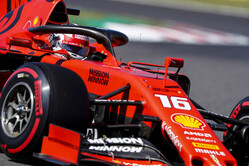 The disqualification of both Renaults from the Japanese Grand Prix was a late bonus for Charles Leclerc, whose own race appeared to be over before the end of the first lap.

A poor getaway was followed by a tangle with Max Verstappen, and despite damage to his car, the Monegasque stayed out on track determined to make up for his errors.

Come race end the youngster was handed two time penalties, one for forcing Verstappen off track and another for not pitting when his car was clearly unsafe.

Finishing sixth on the road, the time penalties meant that Leclerc was demoted to seventh, however, Daniel Ricciardo's subsequent disqualification meant the Monegasque retook the place, thereby moving 11 points clear of Verstappen and Sebastian Vettel.

As the Mexico weekend got underway, Leclerc insisted that he will learn from the experience.

"Whether I would have done something different going back, it's one of those situations that sometimes it happens," he continued, "I just did a mistake, and that's it. As I said I'll learn from it by being a bit more careful for the next race start.

Asked about the penalties, he said: "Well, actually, I was quite expecting it. Once I arrived in the stewards' room and I saw the images, it would have been wrong not to get a penalty for that.

"Afterwards, with Max we had a discussion, he knew I made a mistake and these things happen. It was definitely not a big deal."

Looking ahead to this weekend, the Ferrari driver, who scored four successive pole before losing out to his teammate at Suzuka, said: "I don't know if pole is the best place to start but we'll definitely give it all... and then we'll see. It's a long way to Turn 1... it was a very long way also in Sochi."