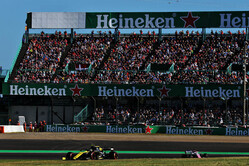 Renault has issued a brief statement following its disqualification from the Japanese Grand Prix, while considering whether it will appeal the decision.

However, considering the subjectivity of the qualification of a system as a driver aid and the variability of the associated penalties in recent cases, Renault F1 Team will consider its next course of action within the timeframe laid out by the FIA."