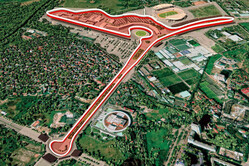 Finally, the Grand Prix Drivers' Association - the F1 drivers' union, so to speak - has found its voice, and finally the sport's powers that be are beginning to listen.

Having attended a number of recent meetings with F1, the FIA and team bosses, the drivers are to be represented at further meetings as the sport finalises the rules package for 2021.

Speaking in the wake of Sunday's British Grand Prix however, world champion, Lewis Hamilton said that it is not only the cars that need attention, the Briton feeling that some circuits are not conducive to good racing.

"In the history of the sport, the drivers have never been a part of the decision-making in terms of advising on tracks," said the Briton. "Yet, we know better than anybody which track we can overtake (on) and which track we can't.

"I don't know who does the selection," he continued, "and I know it's not that they always have a ton of tracks in every country that are possible to race a grand prix - but there are ones that they're selecting for the future that we're going to have not such great racing, the ones that are on the calendar that aren't great.

"People always ask me which are my favourite tracks," he said, "and this is one of them because you can follow. It's just spectacular with the high speed.

"I think the really cool track they used to have in Hockenheim - and it still is awesome - but the big, long one they used to have as quite unique. There was always good racing there but they changed it. Austria was great but I think the old track was even better from what I was told by Niki.

"So, that's something, hopefully the GPDA can be part of in this next step in 2021 rules. We can be a part of advising on that. We're there to help make the sport better. If they're open to... we're happy having the grands prix in these different countries but if they're open to the idea of changing or adapting some of the circuits or using a different circuit in the countries, then we should look into that."

While he didn't name names, the overriding factor, certainly as far as the powers that be are concerned, is money rather than racing. Fact is that those tracks on the calendar that provide the most processional races are usually those that pay the biggest hosting fees.

Previously, Hamilton has warned that Zandvoort, which returns to the calendar next year, will not make for great racing, whilst also casting doubt on Vietnam.

Over the years, in the quest for improved safety, economics and the desire to make tracks more TV friendly, tracks like Hockenheim, the Red Bull Ring and Monza have been emasculated, while others, such as Imola, simply dropped.

"Silverstone and Austria, I think, are two good tracks I think to overtake on and I think it's good for the show," said Charles Leclerc. "Definitely the track has an important role in overtaking and the last two tracks are good examples. So, if we can have more of them on the calendar I think it would be a good thing for F1."

"Definitely it's all about selection of the tracks," agreed Valtteri Bottas. "I'm sure many of the track selections for the calendar, it's just pure political reasons and money, rather than actually focusing on whether it's good for racing or not.

"From our side, it's not that nice. We love racing. Everyone loves good racing, so that's how it should be. And, like Lewis said, as a GPDA, we're very keen to give our input because we're in the car. We know exactly which type of tracks we need to have good racing. We have the feeling. So we are very, very happy to help. And obviously, big plans with new cars, everything for 2021, so hopefully it is going into a better direction. Fingers crossed.