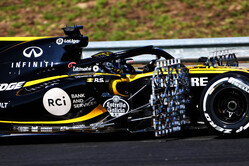 Sky, which becomes the UK's sole broadcaster of all live Formula One this season - bar the British Grand Prix which will be shown by Channel 4 also - is to offer subscribers live coverage of this year's pre-season testing.

Broadcasting will begin on Monday 18 February, when Sky will broadcast testing from 13:00 and continue to 18:00. Over the next three days the coverage will cover the same time slot - which runs from after the lunch break each day until the chequered flag is weaved to signify the end of the session.

In total, the British broadcaster, will offer 20 hours of live coverage from the test, though it has yet to reveal its plans for the second week of testing which runs from 26 February to 1 March.

The news comes days after it was claimed that there would be no coverage, F1's global research director Matt Roberts, saying that testing "will not be shown on TV because broadcasters have not expressed interest in showing it as many feel they can get bigger audiences in the slot with other content.

"Sky used to show it but hardly anyone watched it so they stopped broadcasting it," he added in an AMA (ask me anything) slot on Reddit.