Brown has five-year plan for McLaren 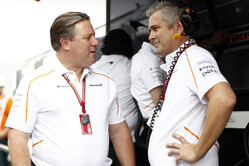 Hard to believe, but it is now over six years since a McLaren driver stood atop an F1 podium - Jenson Button doing the honours in Brazil in 2012.

Since that time the Woking outfit has seen many changes, not least the 'departure' of Ron Dennis, two changes of engine partner, and the return, and subsequent 'departure' of Fernando Alonso.

Like Williams, McLaren is currently going through one of the worst periods in its long history, but in his determination to turn things around, Zak Brown has revealed that he has out-lined his vision for the legendary Woking team, a five-year plan that will take it back to winning races and titles.

"I have just presented a five-year plan, and within that plan, we think we have a journey to get back to winning races," he says, according to ESPN, "and then once you're winning races, you're competing for the championship."

However, contrary to the attitude of Ron Dennis, Brown is seeking assistance from the sport's powers-that-be, like Williams, relying on changes to the regulations and prize money allocation.

"I think it's critical that Liberty makes changes to the sport because, right now, the way the sport is going, it's difficult for more than two or three teams to compete for the championship," he admits, "so I think there are things that are out of our control, but hopefully we can influence that need to change for multiple teams to be able to win races and compete for the championship.

"We have laid out a journey and investment, a road to recovery that sees us getting back to the front of the grid in that timeline," he adds. "But I think we want to stay away from making predictions. We know that it hasn't been pretty for the last couple of years, so we don't want to make that mistake again.

"I would say our expectation is that we will continue to make a step forward - we had 15 (grid penalties in 2018) as opposed to a few hundred - so this year was a step forward, although not the step forward we had hoped to make.

"So our expectations are that we are going to continue that journey in 2019, but I want to stop short of saying where that will be in the Constructors' Championship. I know where I hope to be, but I don't know where we will be until we hit the ground running."

The Woking team features an all-new line-up in 2019, Carlos Sainz being joined by McLaren protege Lando Norris. However, if nothing else, 2018 revealed that even with a race-winning Renault engine on-board the chassis was nowhere near as good as needed, which raises the question as to whether the new drivers will be able to develop the car sufficiently.

Though he is off to pastures new, Fernando Alonso is still in the mix, and Brown has admitted that the Spaniard is likely to test the 2019 car at some point.