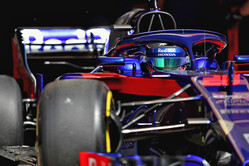 Brendon Hartley: "That was a really good race for me, it's annoying you don't get to score points as a reward, but there weren't any retirements at the front to capitalise on. I started on the harder compound so it was a bit tricky for me during the first few laps, but still I had a strong start and made some good overtakes. To make our race work, I knew I would have to keep the tyres alive as long as possible on the first stint, I had great feedback from the pit wall and the strategy worked well. I felt this was one of the best performances of my F1 career but without the reward of points. The team will work hard over the next weeks to understand why we had such good race pace in Mexico, but struggled two weeks later here in Brazil."

Pierre Gasly: "I had some good battles today, but it was a tough race. I had a good start and got to P8, but after that we clearly were suffering compared to our direct competitors. I tried to fight as much as I could but we clearly didn't have the pace for points today. We knew Brazil would be difficult, but after the performance we showed in Mexico we were a bit more optimistic, so in the end we're a bit disappointed with the way the race unfolded. Now there's one race left of the season so hopefully we can finish on a high!"

Franz Tost (Team Principal): "We started the race with Pierre in ninth position and finished only 13th, so it wasn't a satisfying result for us. The race pace wasn't there and we were simply too slow so we have to analyse why. Brendon started from 16th with the Medium tyre, and we pitted him very late to switch to the Supersoft which was a very good move, because he was able to increase his pace towards the end of the race. However, unfortunately we weren't able to score points today."

Toyoharu Tanabe (Honda F1 Technical Director): "Both cars finished the race, but our package wasn't quick enough to finish in the points and we were unable to make the most of Gasly's ninth place grid position. We must analyse all the data from this weekend and try to do better in the final round of the season in two weeks' time. On behalf of Honda, I offer our congratulations to Mercedes on winning the Constructors' title today."