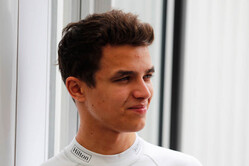 Fernando Alonso: "I'm excited to return to Interlagos because it's an incredible circuit and I've always enjoyed racing there. It's a track where many great races have taken place and it's always a little bit unpredictable.

"I'm also looking forward to putting the last two race weekends behind me and focussing on extracting the performance we have been working hard to maximise in our car, but haven't been able to show. I haven't had the chance to fight for a couple of grands prix now, so I hope we can have a clean battle and show what's possible.

"The Brazilian fans are always super passionate and it's clear Interlagos is one of those legendary tracks that is so famous in the motorsport world. Great champions have driven on this circuit, and with this year's cars it'll feel even faster and more exciting than before."

Stoffel Vandoorne: "Last year my experience of Interlagos was a short one as I was involved in an incident on the first lap and was forced to retire, so I hope we don't see a repeat for either myself or Fernando this weekend!

"From the time I did spend driving the track, I thought it was a really cool circuit and can see why so many drivers from history talk about it as being one of the best in the world. It's fast and flowing and you can really attack the corners.

"Points in Mexico were a great boost for the team, and both Fernando and I will be chasing a solid performance in Brazil. As usual we'll work hard on our preparation and strategy to try and get the best possible result in front of the Brazilian fans."

Gil de Ferran, Sporting Director: "I'm looking forward to returning to my hometown for the first time with McLaren for the Brazilian Grand Prix. It's a race that has been an important part of Formula 1 history for many years and has an incredible fan base of passionate Brazilian aficionados of the sport.

"It's a track on which legends of the sport have won and lost grands prix in the most dramatic circumstances, and unpredictable weather has played its part in influencing the outcome, too. This all adds to the magic of Interlagos and I hope we can see another weekend of great racing this year.

"As we enter the penultimate grand prix of the season, we are as focussed as ever on getting the most out of our car's performance in the final two races, and bringing home as many points as we can. Fernando, in particular, has had an unlucky run of late, so we'll be working hard to bring both cars home across the finish line at what is traditionally a gruelling race for both car and driver.

"Finally, Lando will once again step into the cockpit during Friday morning's FP1 session, to gain more valuable experience behind the wheel at a new circuit."

Focus points: Front braking. Interlagos is bumpy and many of the corners are cambered, which makes it easy to lock an inside front wheel under braking. This costs time and puts a car out of position. It's particularly relevant into Turn One, the most obvious overtaking point on the lap, because the track drops away at the apex.

Unique difficulty: Fuel pick-up. Interlagos has many idiosyncrasies, such as altitude and bumps, but the long left-hand drag from Turn 12 to the exit of Turn 15 at the top of the hill presents cars with potential fuel pick-up problems. They are pulling lateral G for 12s through this sequence of corners, which can cause problems if teams aren't prepared.

Biggest challenge: The physicality of the track. It's one of five anti-clockwise circuits on this year's calendar, but what stands Interlagos apart is the long duration of the corners and the number of bumps. Combine these factors with the record-breaking lap times we're expecting this year and it's going to be one of the most demanding races of the season for the drivers.

Braking: Light. This isn't a demanding circuit for brakes, similar to Silverstone. There are only six braking events around the lap, with the hardest braking zone being on the approach to Turn One. The cars are on the brakes for 1.4s at this point on the lap, with a peak deceleration of 5.5g.

Power: The cars use 1.5kg of fuel per lap, which is low. It's indicative of the low percentage of full throttle (62 per cent).

Aero: Medium-to-high downforce. In terms of altitude, Interlagos is situated significantly lower than Mexico City, scene of last week's Mexican Grand Prix. But it's still 800m above sea level and the altitude affects aero performance. The cars need lots of aero and mechanical grip through the twisty mid-section of the lap, but the two long straights make downforce levels a compromise.