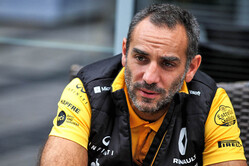 Cyril Abiteboul, Renault Sport Racing Managing Director: Brazil has a great passion for motorsport and especially Formula 1. Many great racing names have come from Brazil, it has some fantastic tracks and there is always a great atmosphere when we arrive in Sao Paulo. Brazil is also an important market for Renault so we will have a lot of activities over the weekend, including an exciting presentation at the Sao Paulo motorshow.

We enter race week off the back of a very promising result in Mexico. We're at a point in the season where we know the car very well and, like every team, have minimal upgrades. This puts the focus on meticulous preparation across chassis and power unit and the strategy throughout the weekend. In Mexico we executed our plan perfectly and were in full control from qualifying to Sunday.

The results obtained in Mexico give us a boost for the remaining two races of the season.

Finally, on Friday morning we received news that the International Court of Appeal (ICA) upheld Haas' disqualification from the Italian Grand Prix in September. We are satisfied with the decision.

After another solid weekend in Mexico, the team heads to Brazil for the twentieth Grand Prix of the 2018 Formula 1 season. Executive Director Marcin Budkowski outlines the challenges of Interlagos.

How would you evaluate the team's performances at the last two races?
Marcin Budkowski: We enjoyed two good results in the United States and Mexico, and certainly it could have been even better had we not suffered a retirement in Mexico. Both circuits suited our package a lot better than some of the previous races and we've worked hard to further our understanding of the R.S.18 and extract the maximum performance out of it.

What's there to say about the team's prospects at Interlagos?
CS: Interlagos is located at a lot less altitude than Mexico, even though it's still one of the highest on the calendar at almost 800m. The effects on the power unit and on the various cooling systems are not anywhere close to the levels of Mexico. Interlagos has a mixture of corners, ranging from low to high-speed. In comparison to the last two races, Interlagos may be less suited to our package, but nevertheless we head there expecting to be competitive.

Why is Brazil such a special Grand Prix weekend?
CS: It's always pleasant to go to a country and a circuit where people are passionate. Brazil is exceptional for its atmosphere. It's a destination where you feel the passion and the fan support both for Formula 1 and for the team. Brazil is also a key market for Renault.