Vettel: We have started to understand what maybe didn't work in previous races 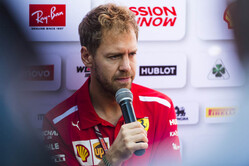 Unless Mercedes and Lewis Hamilton take a serious step backwards this weekend, or Mike Lawrence's legendary Formula One Script Unit (FOSU) - under the guidance of Turk Thrust - has a hand in things, the Briton will wrap-up his fifth F1 title this weekend.

Following another difficult weekend in Austin, speaking to reporters at the Autodromo Hermanos Rodriguez, Sebastian Vettel sought to put a positive spin on things.

"We are approaching this weekend well," he said, "we won the last race and for the team it was an important result after the last tough races. The mood is good after all, and we have made progress, moving forward, which is good for us.

"This track is very unusual because of the altitude which makes the air thinner," he continued. "The approach to this circuit is very simple and straightforward: everybody is trying to put as much downforce on the car as they can, so we'll see what happens. For sure, we've been more competitive on straights this year than last year, so hopefully we'll be the fastest this time too.

"Our primary focus is always on winning the next race," he insisted, "and I think we know what we have to do to stay in the fight. However, it clearly doesn't depend only on us.

"We need to look ahead and I think it's very important that we have started to understand what maybe didn't work in previous races," he added, a clear reference to the fact that a number of recent updates to the SF71H actually compromised its performance. "So, I think it was necessary to step back to understand and look at these points, but the main thing is that we keep moving forward. Obviously, the last couple of days have been important and helped us to make things clearer."

"Winning in Austin was good," added teammate Kimi Raikkonen, "and that is something that I am bringing with me, but we have to look forward.

"We have been racing on this track layout since 2015. If we look at the past editions, we can see that every one of the three top teams has been up there at some point. So, the final result here can depend on many small things and that makes it pointless to start guessing as to who may have the upper hand this weekend. It can go either way.

"As for us, as a team, we can only guarantee that we will give our maximum and fight for the victory."