Brawn: Vettel a "bit out of sorts" 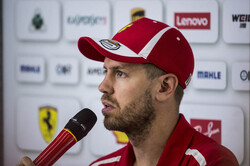 To be honest, there have always been mistakes. For the most part however, Sebastian Vettel went on to get the result.

This year, and to some extent last year also, the mistakes have been more frequent however, and costly.

The mistakes that have littered the second half of this season, be it Hockenheim, Monza, Japan or last weekend in Austin - when a red flag misdemeanour cost him three grid places, which in turn led to the necessity to make an early move on Daniel Ricciardo that ended in tears - have cost the German the title and badly dented his reputation.

F1 technical boss, Ross Brawn, who worked with Vettel's hero, Michael Schumacher, as he won all seven of his titles, has admitted that the Ferrari driver is going through a difficult phase in his career.

"On Friday there was a small one (mistake), when he failed to slow sufficiently for red flags, and he paid the price with a three-place penalty," said Brawn. "Then, in the race, he yet again collided with a Red Bull, this time Ricciardo's, and once again Vettel came off worst.

"It was another lost opportunity to close the gap in the title fight, especially when we saw what Raikkonen did with the same car," he added.

"I certainly don't want to put Vettel in the dock, but these incidents can no longer be seen as coincidence," he admitted. "Rather they would seem to indicate that Sebastian is a bit out of sorts at the moment.

"Now, any hope of bringing the drivers' title back to Maranello is dwindling and the time has come to do the maths," said Brawn, who formed part of the Ferrari 'dream team' in the early to mid-2000s. "Their most important task is to work out how to help Vettel make the most of his massive talent.

"You don't become a four-time world champion for no reason and Sebastian has definitely not forgotten how to win," added the Briton. "In a sport as complicated as Formula 1, you only reach your goals if all the pieces of the jigsaw fall into place. If just one piece is missing everything is compromised."

Vettel recently admitted that he was offered the services of a sports psychologist but that he declined. Based on his recent performances - and his demeanour - the German clearly is "out of sorts" and needs all the help he can get to rediscover his mojo. He certainly cannot afford to continue as is.

Before moving to Ferrari in 2015, Vettel was clearly caught out by the arrival of Daniel Ricciardo at Red Bull, which leaves one wondering how he will deal with the impending arrival of Ferrari protege Charles Leclerc.