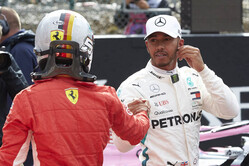 As Ferrari and Sebastian Vettel's title hopes all but vanish, both have come in for serious criticism from the media. While the German has been criticised for his various mistakes, the Italian team has been called out on its strategic errors and its recent drop-off in pace.

The sniping has caused Hamilton to take to social media, the Briton leaping to the defence of his rival as the media storm continues.

"I feel the media need to show a little more respect for Sebastian," he wrote on Instagram.

"You simply cannot imagine how hard it is to do what we do at our level, for any athlete at the top of their game that is. It is to be expected that being humans we will make mistakes but it is how we get through them that counts."

While the Briton has often been critical of Vettel, not least following their scrap in Sochi a week ago, Hamilton has always admitted enjoying the prospect of going head-to-head with the four-time champion.

Both clearly revelled in the first half of the season, when the title was regularly swinging in favour of one then the other, but a major drop off in form from Ferrari and continuing mistakes from Vettel mean that Hamilton can secure the title next weekend in Austin.

"When we were having the race like Monza, for me, I loved that race," said Hamilton in Suzuka. "I would've been happy to have had that every race following that. I honestly thought that we were going to have that. I thought that was how it was going to be, being that they were so strong at the previous two races. But they just lost a lot of performance, and then it's been obviously a little bit difficult for them. Of course, I would love to have the race right to the end.

"Every single race, I want battles like Monza and like the other ones that have been like that," he added. "Those are the races that I love, and I would welcome them more and more, but unfortunately it just isn't the case. I can't let that take away from the great job that we're doing and from our happiness."

Vettel refuses to concede however, and speaking in the wake of Sunday's disaster he echoed his beloved Monty Python's Black Knight as he insisted it isn't over.

"There is still a chance," he said. "We made it a bit too easy for them in the last couple of races. Credit to them they executed well, but we need to look after ourselves and do our bit and then we see.

"That made this team always very strong and will make it strong in the future. We know we still have a lot of potential to unleash and we need to work and dig deeper but we need to prove that the last races is not what we can do."