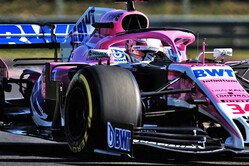 The Canadian, currently ninth in the F2 championship, has already made three FP1 appearances this season, in Canada and Germany with Force India (as was) and in Russia with Racing Point Force India.

Latifi, whose father Michael bought a £203.8m stake in McLaren in May, will reprise his FP1 test role this weekend in Austin, then again at the Mexican and Brazilian events.

He will stand in for Sergio Perez in Austin and Interlagos, while deputising for Esteban Ocon in Mexico City.