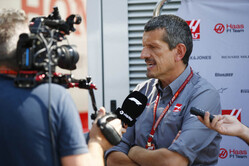 While Lawrence Stroll has been splashing his Racing Point consortium's cash around, paying off the 450 creditors and even having a little left over for the former owners, the row over Force India's prize money has raged on.

Effectively, while the FIA and others are happy to see Racing Point Force India receive prize money from the get-go, Haas insists that as a brand new team - which it is - it should have to wait the mandatory two years before it receives the so-called Column 1 payments.

Haas' argument is simple, as a new team it had to wait two years from when it entered F1 in 2016 to earn the Column 1 payments, so why, it argues, shouldn't Racing Point be treated in the same way.

Since Racing Point took to the track in Belgium, FOM has been busy trying to get the teams to agree to the payments - with talk of Chase Carey waving bits of paper under the noses of various team bosses, but no two bits of paper appearing to be the same - and while all are said to have agreed, Haas has stood firm.

Asked if progress has been made, Guenther Steiner told reporters in Japan: "There was progress, but I cannot reveal what that progress was.

"I need to speak to Chase this weekend to see where this one goes," he added. "But I don't know any more."

When asked if there were developments in Russia, the Italian insisted: "No, no. There was some information sent to us."

Steiner has made it clear that for Haas it is a matter of principal, and the American team would not hesitate in blocking Racing Point's request.

"Why wouldn't I?" The other teams, because they are here so long, never went through two years of not getting money, so they never had that experience.

"They don't know how it feels to be left out, nor how you feel if you are left out and if somebody else doing the same gets a new licence, and does not have to go through this pain of missing out on Column 1 for two years."