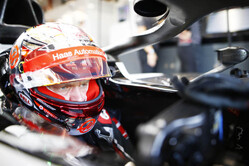 The 16th round of the 2018 FIA Formula One World Championship began with practice Friday at Sochi Autodrom as teams prepared for the Russian Grand Prix Sunday.

Two 90-minute sessions - FP1 and FP2 - on the 5.848-kilometer (3.634-mile), 18-turn track were run under mostly cloudy conditions, with Haas F1 Team drivers Kevin Magnussen and Romain Grosjean navigating the smooth surface of the semi-street circuit in the host city of the 2014 Winter Olympics. This is the fifth grand prix at Sochi Autodrom, and the track has remained relatively unchanged since its inaugural race in 2014, with some new asphalt on the entry to turns one and eight, as well as the pit lane, being the only changes for 2018.

Both drivers ran the Pirelli P Zero Pink hypersoft tire throughout FP1 as they looked to get a handle on the fastest tire in Pirelli's lineup to determine how it would fit into their qualifying and race strategies. Magnussen's quick time of 1:36.196 came on his 10th lap and put him eighth overall. Grosjean's best time was a 1:36.816 on his 12th lap, good for 11th fastest.

Speeds picked up and lap times dropped in FP2 as the track continued to evolve. Magnussen wrapped FP2 as the 11th-quickest driver with a time of 1:35.331, which was .865 of a second better than his best lap in FP1. His quick time came on the 12th of his 33 laps on a set of hypersofts. Grosjean shaved .905 of a second off his FP1 time with a lap of 1:35.911 to claim the 15th fastest time. His quick lap came on his 13th tour, also while utilizing the hypersoft tire. He completed 35 laps.

Magnussen ran his first seven laps of FP2 on Yellow soft tires before transitioning to the hypersofts. Grosjean began FP2 on Purple ultrasoft tires, turning eight laps until he bolted on hypersofts.

Romain Grosjean: "It went okay. It's a track which is not that easy to drive and to find the limits. So, I've probably got a little bit of driving to find. The car, as well, needs to get in a better place. Generally, we've been working a lot on the hypersoft, seeing if it's a potential race tire or not, just to see what strategy we go into qualifying with. The balance was actually alright - almost too easy to drive - and that's never the sign of a really fast car. We're going to work to make it a bit more challenging and faster over one lap. So, there's some work to be done tonight. Tomorrow should be a much better day."

Kevin Magnussen: "It's not too bad today. We're seeing that the front of the midfield is very close. It's only a couple of tenths between P7 and P12. It's an exciting battle up there, and it's going to be tight in qualifying, as well. The hypersoft on high fuel, in race running, is very tricky. It wears out incredibly fast. It's very fragile. I think there's going to be a big advantage if you qualify in P11, just outside of Q3. With a free choice to start on softs, you'll have a big advantage. The balance of the car was pretty good. There are a few things to fine tune, but our starting point was nice. We can work from there."

Guenther Steiner: "It's been a learning day today for us. We need to find the right downforce-drag level. I think we're as competitive as we were in the last races. We need to make a few more changes for tomorrow. Hopefully, we can get better."