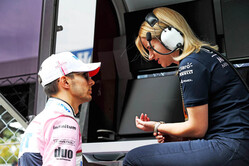 Esteban Ocon: "The car performed really well today and it's clear we've taken a good step forward during the last couple of races. I'm happy with the result - P6 - but I made a mistake on my final lap in Q3, which meant I wasn't able to really fight against Kevin [Magnussen] for P5. That's a shame, but starting from sixth gives us a good chance tomorrow. It will be really interesting to see how the hypersofts perform in the race and we know there will be a lot of cars further back on the ultrasofts. Let's see how the strategies unfold, but I believe we can convert our strong performance today into a good race result tomorrow."

Sergio Perez: "I am happy with how the car felt, but I think we could have been higher up the grid. My aim was to be in P5, but my Q3 laps were not the best and I lost a little time. Hopefully tomorrow we will be able to pick up some positions at the start. I'm optimistic for tomorrow, but it's going to be a long race. Strategy will be crucial because we are not starting on the best tyre compound and those just outside the top ten, on a harder compound, will be our main threat. Maybe we could have tried to go through Q2 on the ultrasofts, but in the end it will be the same for everyone around us. We need to make our hypersofts last and make the most of the first stint. I am sure there will be opportunities and we'll need to be there to take them."

Otmar Szafnauer: "In the lead up to qualifying we felt we had the fourth fastest car, but we didn't quite maximise our performance when it mattered during qualifying. Fifth and sixth places were there for the taking, but we've had to settle for sixth and eighth, which is still a good effort. The challenge now is bringing home the result and making the hypersoft work during the opening part of the race. The priority tomorrow is to have a clean race, bring both cars home and collect some important points."