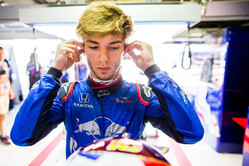 Pierre Gasly: "Today was clearly not the day we wanted. At the beginning of the race, I was blocked in Turn 1 and 2 and lost a couple of places. Very soon I had an incident with Fernando and my floor got damaged on the right side, after that I had another collision with Daniel which compromised the rear. In these conditions, the car was sliding everywhere and the race was pretty much over for me, it was very difficult to go to the end. We knew it would have been a difficult race for us but the damage to the car made it even trickier, I did the maximum I could but we lost the pace shown during the weekend. I just need to forget about it and start focusing on Singapore, which is a track where we normally can do very well."

Brendon Hartley: "I was really looking forward to my first Monza GP. I felt very strong all weekend and was very close to Pierre in Qualifying - even if that meant starting a few positions lower on the grid - I was confident of having a strong race. Unfortunately, right after the start, Ericsson moved a little bit to the left trying to pass me. It wasn't that aggressive what he did, but it was enough to put an end to my day before Turn 1. It's been a great race to watch from the outside, but of course I would have preferred to be on track and finish the race."

Toyoharu Tanabe (Honda F1 Technical Director): "A disappointing outcome to the team's home race, partly caused by both cars being involved in collisions. In Brendon's case, this happened shortly after the start when he was hit by a Sauber and had to retire. As for Pierre, there was a collision with a McLaren after the safety car period and that upset the balance of his car which meant he could not repeat the pace we had seen earlier in the weekend. This was not the best end to the European part of the season, but now we will just focus on the remaining races, starting with Singapore, a track which should be better suited to the characteristics of our package."