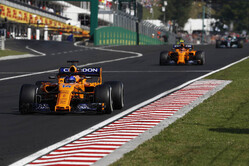 Speaking at the weekend, Fernando Alonso admitted that he wished whoever controls the team radio conversations that are made public would leave him alone as he feels that his outbursts are unfairly singled out.

Fact is however, the Spaniard's, along with those of Kimi Raikkonen, Daniel Ricciardo and Romain Grosjean are usually the most entertaining.

During Saturday's chaotic qualifying session, asked what tyre he preferred in the ever changing conditions, the Spaniard declared "who cares, even a rocket ship won't help us".

He was on good form again on Sunday, at one stage complaining that Romain Grosjean had illegally passed him under the safety car.

Calling on his team to get the stewards to investigate, he barked: "I was right on the delta!"

When the stewards deemed there was nothing to investigate, the Spaniard subsequently admitted that he might have got it wrong, conceding that Grosjean has caught him on the hop.

"I felt like he stole my wallet!" he subsequently told reporters. "He just did a better job.

"We have a few seconds' warning the VSC is about to finish," he continued, "so I was trying to get close to the delta time I was given - between half a second and zero - the ideal is to be within 0,1s and when I got the green light I accelerated immediately, but by then Grosjean was already alongside me, so he must have done a perfect job, with the right timing.

"I lost the position but thanks to the pit wall I got it back soon after," he grinned.

"The races are on Sunday," said the Spaniard, "many people get very happy on Saturdays but come Sunday they don't score points. I think we did a good race, particularly the strategy was really good, we managed to extend the first stint by quite a bit and managed to get both cars into the points, in 8th and 9th place, which was really great. Then, of course, Stoffel had an issue, but at least we managed to score a few points.

"We didn't really have a fixed strategy when we went into the race," he admits. "We had thought we would stop between laps 20 and 25 but, in the end, we want almost all the way to lap 40 because we could see Ocon was holding the group we had been fighting with and every extra lap we managed to get was worth gold. We tried to extend the first stint as much as possible and it worked out fine.''